This morning we parkrun first at Leicester Victoria then L and Daughter get the train back to Nottingham.

MD doesn’t get to run because we have an Agility Show at Market Bosworth Rugby Club and we drive there straight from parkrun. All my runs are scheduled late morning and we arrive just in time to do the first one.

We get E’d but it wasn’t too bad. Then our next run is in the Crufts Individual Qualifier. It was better and clear but seeing as we had an argument mid-course I don’t think we’ll be taking up a qualifying berth. We do all three of runs by lunchtime and then we head home. I do like these short dog shows.

In the evening, L has got tickets to see Terry Waite at Derby’s Book Festival at Quad. That’s at 5pm and then afterwards she heads over to Broadway where we meet for food and Ian McEwan.

Ian McEwan is my favourite author that I've never read but I do like the films based on his work, so his 'On Chesil Beach' intrigued me.

It is the story of Florence (Saoirse Ronan) and Edward (Billy Howle), two young university graduates from different cultures. She is a talented and ambitious violinist from a wealthy parents (Emily Watson and Samuel West) while he is the son of a schoolteacher (Adrian Scarborough) and an artist (Anne-Marie Duff). His mother is brain damaged following an horrendous incident with train door. 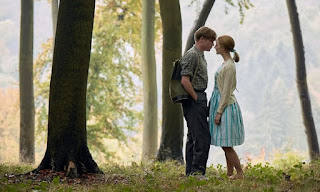 They meet when Edward, a little drunk after celebrating his exam results, gate crashes a CND meeting because he feels he badly need to share his success with someone, anyone. In Florence he feels he's hit pure gold and wants to share more than just his exam results with her. 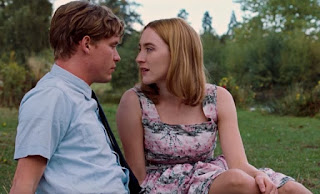 Like other McEwan adaptations all this back story is revealed in flashbacks from where they are now which is their bedroom in a quaint seaside hotel on Chesil Beach in Dorset on honeymoon.

Edward is eagerly anticipating the big moment of consummating their marriage while Florence is absolutely dreading it. I think she’s too posh for that sort of stuff and despite the fact he’s positively gagging for it, he bottles it. This creates an uncomfortable situation and even the waiters who serve them dinner laugh at them. This is the 1960s but nothing is swinging here. Nothing is zipping either. Why did they never sort that zip out? 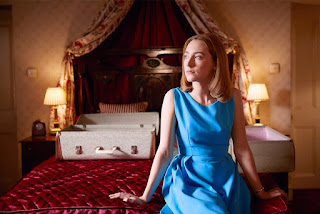 It is excruciating for them but especially for us and a bit of a surprise really considering how natural, normal and intimate the scenes of their courtship were. Then the thing that understandably finally kills off their attempts at sex is Edward’s premature ejaculation. Clearly this wasn’t covered in the sex manual Florence had been terrifying herself with but how he got himself that worked up when so little progress seemed to have been made on the seduction front I’m not sure. The film is so overwhelmed by its momentum impeding flashbacks that its enough to put anyone off their stroke. 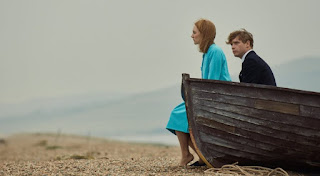 Florence legs it on to the beach where they argue and eventually she offers a compromise deal, herself as a dutiful but sexless wife. He’s not buying that, he thought he'd signed up for the whole package, and I don’t blame him. So apparently that’s it. One crap shag and its all over. That’s a worry and if true how did anyone ever get born?

Given that the book is only a short novella, the film feels padded out and McEwan has indeed added some extra scenes. These include quite an eye-opening one thirteen years later, set in a record shop run by Edward. A child, Chloe, appears in his shop and she is clearly Florence’s daughter. She is aged about twelve.

So whatever Florence’s hang ups were she got over them pretty quickly didn't she and with a member of her string quartet, Charles. Whereas in the book she remained single and filled with regret, here that is clearly not the case. Perhaps her failure to consummate her marriage was actually down to unresolved feelings for another man?

In all a disappointing film, that never really exploded into life even when you think it ought to. Sorry Ian, I don't buy it.