L and I do a Sunday morning 7k run. This comes after doing Parkrun on Saturday at Wollaton where I took a tumble down by the lake where either a rock or a tree root felled me. The Lad appeared not to notice and attempted to keep dragging me along. He’s no Doggo, who would have immediately administered mouth to mouth resuscitation. I crossed the line with a gashed knee, grazed elbow and, as L points out later, a grazed back of my shoulder as well. I have no idea how I did that. The Run Director had to add me to their race report.

In the evening we hit Stapleford for a few beers

On Monday we discover that we didn’t do very well in the ticket ballot for the Commonwealth Games but we did however get tickets for the finals of the Lawn Bowls. L is very excited about that and says it’s on her list of things to try in retirement. This is, I understand, a long list.

So we’ve spent the princely sum of £44 whereas L’s sister has apparently spent over £800 but she doesn’t have Lawn Bowls! We did only apply for finals and we can add other events later.

L’s mum escapes from self isolate after a mild bout of Covid and promptly head off into town as usual.

I attend the gym on Tuesday which will either enhance or hinder my run tonight. At least Derby Arena seem to have sorted my gym membership out now. My run is only 7.5k but that’s a start as I build up to the Derby Half.

On the back of that, I cycle on Wednesday which wasn’t quite as much hard work as I was expecting. It’s just me cycling this week as my colleague is having a week on the Cornish ales. When I get back home, in a fit of jealousy, I book us a week on the Cumbrian ales.

Wednesday is also dog training, while L does the Pumpkin Trail, and Thursday is the horrible Asda trip.

I work from home on Friday because I want to and almost no one is in the office.

On Saturday, we parkrun at Forest Rec and Derby lose at home to Blackburn. Then on Sunday I go on the velodrome where I make a schoolboy error, cycle too slowly on the banking, fall off and (the worse bit) bring someone else down with me. So now I have more bruises, knee/hip/shoulder, to add to the ones from Parkrun.

Posted by FitForNothing at Sunday, October 31, 2021 No comments:

On Saturday evening I am in Derby at The Venue for a gig.

The support band Pale Blue Eyes probably need to chill out a bit more. Perhaps wear their guitars a bit lower, the short guitar strap is always a bit of a red flag for me, and the drummer needs to take her coat off or something. They are undeniably pleasant and make a nice enough sound but I just find them a bit lacking that is apart from the outstanding use of the dry ice. Sorry. 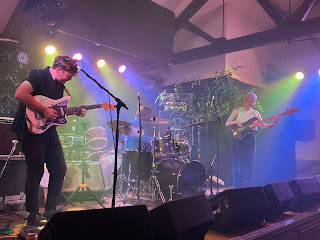 The band formerly known as British Sea Power play their first gigs in two years on a tour delayed from 2020 that I made sure I bought a ticket for to help support tonight’s venue through lockdown as well as contributing to the Save Our Venues campaign. 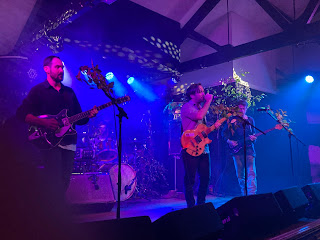 The band are never predictable and they certainly aren’t with tonight’s opening which is the long meandering (in a nice way) prog rock-ish instrumental Heavenly Waters that appeared as a b-side on the 2003 single for Carrion. From there on things are slightly more predictable with welcome airings for the likes of ‘The Lonely’ and ‘North Hanging Rock’ among others.

There is plenty from the new album, ‘Everything Was Forever’ due out in February 2022, in the form of the rocky Doppelgänger, the more sing-along Two Fingers, We Only Want To Make You Happy and Folly, their current single. 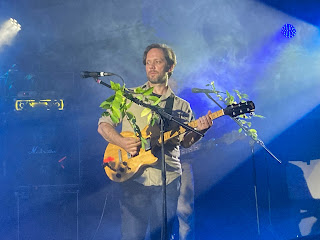 Along with the name change, they have dropped the ‘British’, apparently the bear has been retired, although the foliage strewn stage clearly hasn’t and nor has violinist Abi despite her absence tonight.

She is stuck sheep sitting on the remote croft on the Isle of Skye that she shares with Neil where they have had three new-borns this year. Probably the best excuse ever. 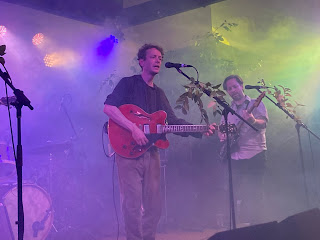 The encore features Waving Flags, their pro-immigration and open borders anthem, a song which would probably get the right wing press’ backs up (if they knew about it) as much as the name change did (they noticed that). It also explains why they did it, what with people getting the wrong idea about the politics of a band who are far from nationalistic. 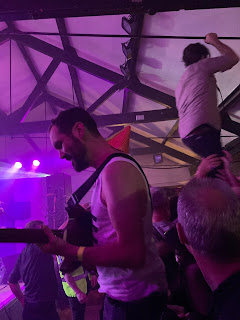 After that and after a two hour set, in a bizarre ending, but then aren’t they always, Yan and Martin are in the crowd. Yan is crowd surfing and Martin climbing on the beams (again) amid an impromptu (not on the set list) The Spirit of St. Louis. I wonder if they have to stress test the beams beforehand.
Posted by FitForNothing at Saturday, October 23, 2021 No comments:

After spending Monday getting back from Portsmouth I work from home on Tuesday to give the boys some company before we all go off to the match in the evening. That is my Dad and I at the match and L Mum sitting.

I have entered the Derby Half Marathon, which is at the end of November, while L, Daughter and Daughter’s +1 have all piled into the 5 miler. So that’s four of us who need to start doing some training.

L says that if I beat her she will cry. Given that we are on different courses that would take some doing. She would have to take longer to do the five miles than she did for 10 miles at the weekend. She says anything is possible... but not with my knees. At least she would get her money’s worth as the race works out at about a fiver per mile.

On Wednesday I am again not in the Derby office as I head down to our Southern office for some training just as our new owners arrive in Derby to give a presentation on the ‘future’. Having survived some horrendous weather, mainly torrential rain, on the way down I then have just two hours with the guys down south before we all have to Teams in remotely to watch the takeover festivities (if that’s the right word) which takes up most of the afternoon.

Meanwhile the hot news from Nottingham is that Daughter as had two 2 ‘Suddys’ in one day. None for months and then they come along like buses. This should finally get her police training signed off.

In the evening I go out in Horsham, eating first in the Brewhouse & Kitchen before heading off to visit a micro pub I liked the look of the last time I was here but that was closed because I came on a Monday. Now I see it has closed down completely.

I do find a place called Piries Bar which is nice but limited in its beer range. Much better is the Malt Shovel and I will head straight here next time I come down.

On Thursday we head to the same country hall as last time for a dedicated training day without further interruption.

I am finally back in the Derby office on Friday and I do so by bike. My colleague doesn’t join me as I see that he’s having his own WFH day clearly to avoid cycling in what was bloody windy conditions.

Posted by FitForNothing at Friday, October 22, 2021 No comments: