L wishes me luck at the physio. It should be the physio she's wishing luck to.

The physio tells me that I have damaged my medial collateral ligament. Although I had already deduced this myself after a consultation with Dr Google. So she doesn’t get any points for that, although she seemed to know her stuff about knees. Which she could talk about constantly, without taking breath. I could barely get a word in.

I also have poor biomechanical control of my foot position. e.g. when I try and stand on one foot I fall over. I think I actually just have poor balance .

She begs to differ and suggests my two calf tears, both on my left leg, and now my medial thingy are both caused by my wonky stance. Being wonky meant something had to give and it did. So basically I have to practice being less wonky.

L gets excited. Does this mean I have to do this at the gym? No, in front of the mirror. Which I do when I get home and it totally freaks both the dogs out. Then once they get over their initial shock, they see it as some freaky new game. Getting fit is going to be harder than I thought.

Well at least I haven't been banned from playing squash, not that I mentioned it. I have also been told that my current (pathetic) fitness regime is fine.

Squash goes ok, I win the first game again. Although the first to 11 idea doesn’t come into play on that one as it finished 16-14, just like the old days. After 5 games we finish 5 minutes early because my calf (not my knee) feels like its done enough.

Time for a free pint at the Navigation as I cash in my January 5 for 4 deal, not that it benefits me. Opponent always pays for the drinks, I pay for the game.

My latest injury, my calf, is tight and sore but improves slowly as I limp along. Although that’s not the reason I’m an hour late for work, there’s yet another accident on the A52. I should have cycled, even with one leg I’d have been on time. Then again, the wind is horrendous, practically gale force. So probably wouldn’t have been a good idea.

So today becomes another fitness free day. I shall rest my leg and attempt to play squash tomorrow. At least I won't be full of pie at squash because, at work, we bring forward Thursday’s pub trip due to me being at the physio tomorrow. This is to look at my old injury (left leg), not the new injury (right leg).

That’s odd. Only one dog runs to greet me at the front door when I get home. Wonder where the other one is? Again, somehow Doggo has managed to get into in the spare room, close the door behind him and impressively leave the clothes dryer, that was supposed to be blocking his path, in place. He's Houdini in reverse, because of course he can get in but he can't get out.

It’s difficult to judge the weather this week. A lot of rain and wind is forecast. I deduce that today might not be a good bike day, so decide to run from work.

That plan kind of goes awry when about three miles into my run my calf goes really tight. When it does that it either loosens up again as I run or tears... I proceed with caution, slowly and neither happens. It just gets tighter.

Then just as I’m considering aborting and getting a bus, the bus goes past me. It's twenty minutes to the next one, so I might as well walk/hobble for a bit to see how it goes. It doesn’t. Twenty minutes of hobbling later I get the next bus, which then crawls in traffic all the way into Nottingham. It’s one of those days.

Back home, I have an ice pack on it when L walks in. She’s shocked, clearly thinking it must be seriously broken if I’m taking such remedial action. Honestly, you try and be sensible (for once), like your partner has encouraged you to be and what do you get? Your partner’s finger hovering over the ‘9’ key on the phone about to press it three times.

This has all happened because it’s the Alsager 5 mile race this Sunday and I thought it was about time we did a race, now the ice has all gone. I only entered us yesterday and then the very next day... bang.

Tonight’s dog training is cancelled. That snow may be gone but all this has left us with is a waterlogged pitch. I couldn’t have gone anyway but at least I don’t feel now that I’m missing out. I have a committee meeting tonight which will be fun, not.

L says football in the garden is also cancelled, due to a waterlogged pitch. MD won’t understand this, he plays in all weathers.

So to my committee meeting, which I do quite enjoy in a way but when I saw the length of the agenda my heart sank. When I put something on the agenda I send out an email briefing everyone beforehand, to save time at the meeting. Other people don’t do this; in fact I think they withhold it for exactly the opposite reason. Oh well.

The heavy snowfall from Friday night has now almost gone as the temperature suddenly shoots up. The park is now just a mass of puddles and mud. Not pleasant but the dogs love it.

In the afternoon we go to visit an old work friend of L’s who has unfortunately been unwell. Over there at Calverton they seem to be holding onto the snow better than we are but even that will be gone soon.

I like the snow, winter isn't winter without snow. There is nothing worse than dark, wet, winter days. Snow makes everything much pretty and more exciting.

We find out why we couldn’t get tickets for ‘Chasing Ice’ yesterday. It’s being screen in the Lounge at Broadway which only holds 12. So it’s certainly going to be cosy. We didn’t actually know they had a ‘Lounge’ and have to be told where it is. It’s all comfy settees and the like, so at least if the film isn’t any good, nodding off will be a real pleasure.

‘Chasing Ice’ is a documentary about a chap called James Balog and his Extreme Ice Survey team who go out to photograph the melting glaciers by using automatic cameras, set to take shots over a long period of time. The resulting time lapse scenes are as equally impressive as they are shocking, showing the rapid retreat of the glaciers. 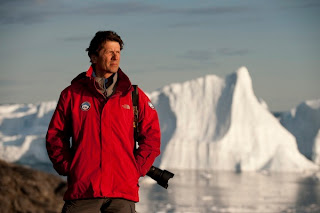 The film does preach a bit about climate change and Balog has an obsession to document it. That as well as a passion for photography and a dodgy knee. He has my sympathy there. It’s a knee on which he’s had several operations. He ignores his physio too and we see him out on the ice on his crutches at one point. This along with the problems they had setting up the cameras in the harsh environments of Greenland, Alaska and Canada, make the film more interesting for me.

I suppose on the climate change front the film never really gets to grips with the issue, other than providing irrefutable photographic evidence that it exists but doesn’t prove that it is man-made. While, if it is, they don’t suggest anything to us that we can do about it. Cracking photography though. 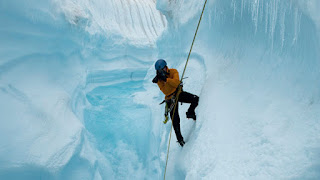