Show Us How Bad It Can Get


L is going to be on telly. She’s doing a Zumba class today and they’re filming it for a Nottingham ‘This Girl Can’ ad. They promise to blur them all out... must be girl thing.

First though the parkrun at Forest Fields where the dogs and I watch before dropping L off for her screen test. We head home to meet a chap who is putting us through a Green Deal assessment of our all-round energy efficiency.

This is just a big hoop to jump through to get a Government Grant for solid wall insulation. We’re not allowed to request it because they have to recommend it. So we’ve had to request that they come and recommend it...

In the evening we head out to the Barrel Drop for a couple of pints of Dutch courage, then we head to the Cornerhouse because oddly Broadway aren’t showing it.

So let’s recap in case you’ve been living under a rock and haven’t heard about the book ‘Fifty Shades Of Grey’, which my partner and I got through the audiobook of on a road trip to Scotland. Anastasia Steele is a mythical beast, the only remaining good looking 21 year old virgin in Seattle. Who, according to the book, has not only never had sex but never had neither a moment of self-pleasure nor a boyfriend either. Even though she must have had plenty of offers. So, one choosy chick.

When she stumbles into the office of Christian Grey CEO Grey Enterprises, whom she interviews for the university newspaper, she has this ‘holy cow’ moment and suddenly her inner goddess is doing the can-can or something or other. Grey is a damaged soul with sexual tastes that includes rope and cables ties from the US equivalent of B&Q. He likes to take pretty little students into his Red Room of Pain and gives them a good feathering, once they’ve signed the contract of course. So as soon as Anastasia Steele bites her lower lip, he decides she’s next for the full shackling.

Whereas... with something like Fifty Shades, you probably can’t go wrong... The good news is they have taken a chainsaw to most of EL James verbal diarrhoea. Anastasia’s inner goddess is back in its box and there’s no ‘holy hells, ‘double crap’ or even a solitary ‘oh my’. Although I’m quite sad about the loss of the ‘oh my’ actually. Ana (Dakota Johnson) is also much less of the irritating sap that she is in the book and is not reduced to a moist mess once, thankfully. Well, not that she tells us. 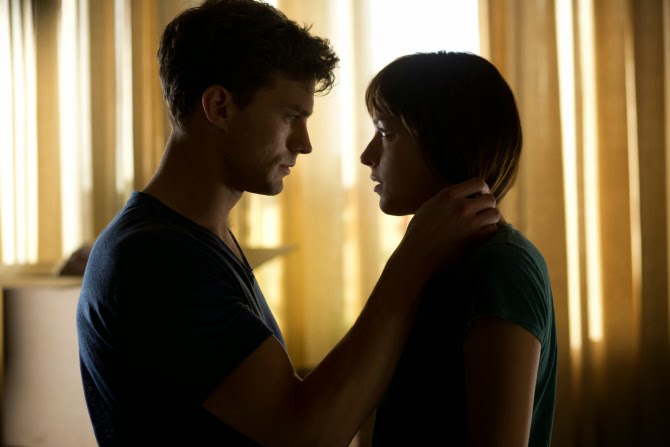 This Ana is no walkover and you’d probably want her in your own boardroom nibbling on her lip whilst renegotiating an important contract for you, such a good fist she makes of this one. Fist perhaps not being the most appropriate word to use as that was struck out of the contract negotiations along with the butt plugs.

Already I’m wondering why this wasn't this up for Best Adapted Screenplay at the Oscars? Did the Academy not appreciate what a truly great salvage job they've done here?

Johnson, initially a bit wooden, really grows on me and not just because she’s cute and mostly naked. Though she is. I also warmed to Jamie Dornan (as Christian Grey) eventually. Both actors managed to capture the essence of the book’s main characters.

Plot wise, the film is true to the book although it all does seem a tad rushed as they attempt to cram everything into a couple of hours. There is little time for suspense to build or for the characters to be flushed out. Whilst Ana lost her innocence pretty quickly for someone who’d hung valiantly onto through so many years of Higher Education.

There are, of course, plenty of sex scenes but they are no more explicit than in many other films and TV series (hello to Game of Thrones). However they do feature a hell of a lot more of Johnson than they do of Dornan. True Dornan is topless at lot of time but Johnson spends huge chunks of the film completely naked. Not that I particularly wanted to see more of Dornan but this is a bit weird for a film supposedly aimed at women.

As in the book I found Christian Grey quite unimaginative when forced to ad-lib outside of his red room where ‘vanilla’ becomes the predominate flavour of the day. Although I'm hoping at least that the film makers now have the confidence to ramp it up for book two.

It turns out that Fifty Shades is a far better film than it was a book and I quite liked it. It is certainly far from the worst film we’ve seen so far this year.


Afterwards we head to the Peacock for some slightly too old Old Peculiar and then the rather late curry that L has promised me at the Noor. It’s not a great curry which is usual for there but it was perhaps because I picked something different this time.


It has been announced that all new albums and singles will soon be released globally on Fridays. This is to align the whole world so that internet sales make sense.

This means that the new chart can also now be compiled and revealed on a Friday rather than the current Sunday. This has sent everyone off on a wave of nostalgia about the demise of the Sunday Chart Show Countdown.

The real nostalgia though is for when the chart was released on a Tuesday lunchtime. That was the earliest they could do it because it took two days to compile, by pen and paper probably. It was repeated on the Tuesday early evening show and then again on the Wednesday Breakfast show. The chart was a big thing is those days. The Sunday show was just a rather late recap of sales figures that were by then a week old but this was when you taped your favourites.

Every Tuesday we used to gather around a radio at 12:45 during our lunch break, waiting for Newsbeat to finish. Then they played the top five in reverse order without giving the rest of the chart away. After playing number two you’d then get the countdown in full before they’d play the number one just before 1pm at which point we had to leg it back to class. It was a brilliant format, compulsive listening and quite a social thing.

All of that went when technology moved on and they could collate the sales data faster meaning they could move the initial reveal to Sundays. Sadly they kept the Sunday format rather than the Tuesday format, meaning you had to go through the whole top forty, taking ages, before you found out what was number one. The tension went and everyone I knew stopped tuning in, at least until the last ten minutes or so. It was a major marketing cock up.

I would say bring back Top of the Pops, put it on a Friday and make that the chart reveal. Just don’t forget to do a CRB check on the presenters this time.

L wishes me good luck with dancing boy as I head off for another sports massage. The chap is a former dancer but a rather evil masseur. He doesn’t disappoint on that front.

End Of Another Era


It’s the end of another era today, the council are collecting the old double bed today along with its lightly notched headboard. I did remember to remove the handcuffs first. I'm more sad about the headboard than the bed, which was truly knackered. I’d bought that headboard especially as the old one had nothing to grab on to, so I didn’t really see it as having much use. Ah, the fond memories.

I have a very eventful morning on the bike. It wasn’t the rain that was the problem, more the wind and the two punctures. I went down a rather large pot hole and punctured both tyres at once. Never done that before. It has to be said the roads are in a dreadful state at the moment but they don’t tend to start fixing them until late summer.

The Brunswick has its Damson Stout on at lunch time, which goes down very well.

Squash is off, as there are still no vacancies for a game this week.

I get back on the bike to ride home and cross my fingers. I can’t have any more punctures because I’ve used up all my tubes.

L heads off to do a duathlon. Running to spin then running home. She arrives home dripping with sweat. Very nice.