Wednesday is spent walking around the Dentdale valley, all the time trying not to stray too far from a short cut home in case Doggo’s limp flared up. Not that the number of huge dog un-friendly stiles helped him much. We continually had to lift him over these. 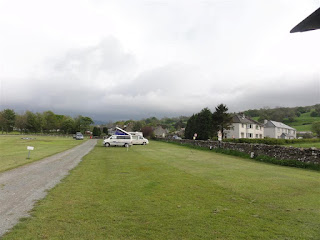 The project was actually to find Dent train station, the highest mainline train station in England at 1150 feet above sea level. We found it eventually but it was right up the top of a big hill and we didn’t think it was worth pushing Doggo’s ageing limbs up there, so we just waved at it from a distance. It was also about 4 miles away from Dent itself, which is a hell of a long way to drag a suitcase. 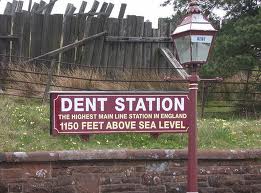 Our evenings were spent alternating between the two pubs but we also popped in to the Dent museum aka the Heritage Centre, which had a lot of info and memorabilia on the Dalesfolk of times past. It also had a lot about knitting, so obviously L was in her element.

On Thursday we left the quiet tranquillity of the Yorkshire Dales and hopped across the M6 to the Lakes where we were due to meet up with L’s sister. Predictably for a school holiday week, it was standing room only. Our usual campsite at Great Langdale was packed; they were even camping in fields that I didn’t know you were allowed to camp in. L was a bit miffed at this invasion of ‘our’ campsite. I mean where were all these people in January? I think they should have a separate field just for regulars.

Bizarrely most of the campers appeared to be the sort of folk who once at a campsite prefer not to leave it and the Old Dungeon Ghyll pub was quieter than it usually is in winter. Truly bizarre but very welcome. Although we eat over at Chapel Stile in the Wainwright’s first before ending up there.

On Friday we break new ground and go for a walk near Coniston that takes us around the 'lake' at Tarn Hows. We start and finish our walk in near solitude but Tarn Hows itself is very much a tourist trap, as we discover as we pass through the area. Nice ice creams though.

In the evening we head to L’s sister's cottage in Ambleside which is on the road up to the Kirkstone Pass known as ‘The Struggle’. We head out for a meal and a drink with them at the Queens Hotel which has a decent range of beer but not as good as the Travellers Rest. Which we popped into post-walk, as we had a bit of time to kill, where the recently illusive Snecklifter was hiding. That had to be sampled of course and then re-sampled, just to be sure.

Tomorrow (Saturday) is race day because naturally no holiday is complete without a race.
(Friday 31st May)
Posted by FitForNothing at Friday, May 31, 2013 No comments:


This morning we take our little girl, Daughter, to East Midlands Airport and bid her a tearful farewell as she heads off to La Rochelle for all of five days. Although she looks like she’s being sent away for ten years hard labour. As she's going to join her father, this may well be the case.

He drove out there without her because he was planning on taking a barbecue but then didn’t. So in the end this flight was unnecessary but here we are and she looks so worried you’d think it was her first time on a plane. You wouldn’t know she’d done around a dozen skiing holidays and even a trip abroad with her friends.

We say our goodbyes and leg it. Well the car park is half an hour at a flat rate and then it escalates sharply thereafter. We try to pay but can’t find the ticket machines, which have been craftily hidden behind a building in Arrivals and we’re in Departures. If I was cynic I’d say this was a devious means to increase revenue.

Then we’re on a blissfully quiet M6, if the M6 can ever be described as such. The joys of travelling on a Saturday I guess, when most people are already where they want to be.

We leave the motorway at J34, two junctions early, to drive through the countryside into
Dentdale and what I suppose is its capital Dent. We camp, take a short hike and then find the pub. 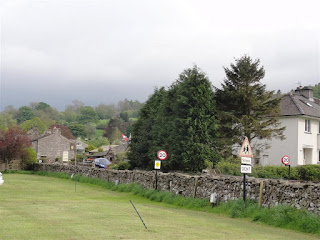 There are two and first we try the Sun, and then move on to the George & Dragon, home of the Dent Brewery. Where the prize exhibit is T'Owd Tup, at 6% not to taken lightly. 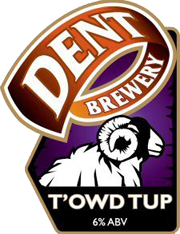 
It's a Bank Holiday today and a day at home, doing DIY! Well fixing the toilet overflow, re-securing a pipe on the new heated towel rail and fitting a new sink plug. Way to go.

We’re off on holiday tomorrow via East Midlands Airport, it’s not often you do that without actually getting on the plane.


Today is the second day at the Nottingham Dog Agility Show and I live in hope that the little tyke might redeem himself a little. Although we have to wait until after lunch to find out.

Doggo does his run first thing, is clear and is done for the day. Paws up for him. Then we kick our heels waiting for MD’s first run to come up. It’s a pleasant-ish heel kick though as we watch our club’s teams compete in the small and medium dog Crufts Team Qualifiers. The Large dogs, including MD, go in the afternoon. When he also has to fit in his three individual runs.

It’s also very hot again and actually MD is a little hotter today, sort of lukewarm. Five faults in his first individual run and then clear in Team. In fact the only clear in our team, so we have bragging rights for that, if nothing else.

Neither of his last two runs are clear but are much improved from yesterday. So I can take L out to the pub tonight with a least something to celebrate. We go to the Hand and Heart where the beer is again excellent and the meal we have there is ok but nothing special, considering the rather high price.

This Is A Jump


Today is the first of two days at the Nottingham Dog Agility Show and the weather turns suddenly very hot.

The question is, will the same thing happen to MD? Will he turn suddenly red hot?

Nope. First two runs... bloody rubbish, both of them. He has one more chance to redeem himself then it’s down to Doggo to save the day, yet again.

Redemption does not come his way. So Superhero Doggo arrives and runs his course clear, not once but twice, as the timing didn’t work first time.

I get home and immediately sentence MD to the hard labour of extra training in the garden. It goes along the lines of ‘this is jump’. Once he’s got that concept we move on to ‘now jump over it’. Eventually I feel some progress is being made. We have a team run tomorrow, so no pressure.


I’d liked to have got a cycle in today but the forecast wasn’t pleasant and for once it turns out to be correct. It would have been quite exciting on the bike I guess, in a wet and windy sort of way.

L is at home with the boys today and fills her morning by upsetting Daughter by sending her fifteen emails all containing links to jobs. Daughter prefers to do her own job hunting.

Although it just goes to show that there are plenty of jobs out there now that other students are finishing their courses and heading off to other pastures. So snap them up if you’re in Sheffield and looking for part time work because I’m sure they won’t be available for long. In fact they’ve probably gone already.

Daughter is actually coming home today and we’re all meeting L’s folks in Derby for a meal. I book her on the 12:05 train but at 2:30 she’s about to get in the shower... students.

So it ends up with L meeting her straight off the train and hot footing it over to Derby with her luggage, which they have to do on the slow bus because we’re poor and we’re not paying the Red Arrow's inflated prices just because they won’t honour the all day tickets at rush hour. Actually they originally get the wrong slow bus, but in the right direction, and do a seamless change at Beeston Bus Station.

Meanwhile there’s me twiddling my thumbs waiting for them in Derby. I opt to kill a bit of time by staying later at work and then amble round town a bit rather than go straight to the pub. I end up there eventually and have a pint of Liverpool Stout in the Silk Mill, which has a touch of River Mersey about it.

Just before they arrive, I move up to the Royal Standard where their Stout is much more my style, liquid tarmac.

We then get another bus over to the Mallard Beefeater, which wouldn’t have been our choice for a meal out but the menu doesn’t actually look too bad. That is when we were able to see it. By the time we ask to order a second drink, it is done by torchlight and when I visit the Gents, it is by kind courtesy of the chap at the urinal next to me and the glow from his mobile phone. Cosy.

You see the power failed on them and after several frantic calls to whomever, they eventually admitted defeat. It’s Friday night of course, so the whole department of whomever would have been down the pub in ‘not our problem Guv’ mode anyway.

So we leave after getting all our drinks complimentary and L’s brother chauffeurs us all up to another pub, the Argosy. Which is a real step down in class from somewhere that wasn't even half way up the staircase in the first place.

The menu is a struggle, as there was really nothing on it that I thought was safe to risk, except perhaps the lasagne so I had that. You can't go far wrong with lasagne. Can you?

It arrived looking like they’d had a real battle to get it out of the plastic microwavable tray and the lasagne had lost, badly. It’s not often you go in a ‘restaurant’ and feel sorry for the food.

Anyhow, it was a pleasant enough evening of socialisation, if you forget about the food, and we did also get a lift back to the bus station, which made the journey home one bus easier.