A fitness instructor has started his bid to be the fastest person to run around the world. Kevin Carr reckons it’ll only take him 19 months...

L considers that as her next challenge but, as her boss is unlikely to give her that much time off, settles in the end for a mere 5000km cycling in a year. That includes the static bike in the gym.

I do need to increase my own distances a touch I suppose, if I’m going to do this Half Ironman next year. Unfortunately the one distance I need to increase the most, is the one I don’t want to. 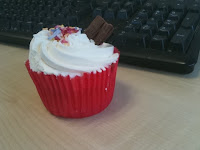 I have cake to fortify myself for my run tonight.

Which isn’t as nice as it looks, underneath all that shaving foam is just plain sponge. The flake was nice though.

I run 9 miles, quite a bit of it in the rain which is actually a nice change from all this sun we’ve been having.

Both of us are on our bikes today. It’s not often I get chance to say that. L has even been out and bought some fingerless cycling gloves. Serious stuff. We have a bike event next weekend.

I give her some advice and tell her that to look meaner on the bike she needs to take her pedals off and go clipless but she’s not buying that.

In the evening L goes over to her parents and I go to the pool. I need the money. One more visit this month is required to keep the cash back on course.


After four days with no notable physical activity I’m knackered. Perhaps the country should get fit by taking up dog shows, as this is all I’ve done since Wednesday.

While I’ve been away Derby have sold a player. John Brayford to Cardiff for £1.5million, which is more than the total of what we’re spent so far on new players. So the talk of them investing in the squad this year seems to have been just that. Talk. Although I suppose there’s time to rectify this yet.

Also while I’ve been away Nottingham city council haveissued a proposal to build some squash courts. Three of them. Shock horror. It’s just a shame it's at the hardest to get to leisure centre in Nottingham. Beggars can’t be choosers I guess.

L’s night out is off. Whereas my night out, having been off is now on. I was going to go swimming but now I’ve been summoned to dog train. I’m not sure if they’ve looked at the weather forecast, which isn’t good. It seems to know that L is planning a bike ride.

It doesn’t look promising when we arrive for dog training and it starts raining. Leaving Doggo forever looking skywards in case thunder and lightning develops. It doesn’t though and we get a decent session. Although MD, after his weekend, is crawling at the end of it. As am I.

Shouting Is The Way To Go

Less stalls to deal with today as some of the smaller ones give up battling for trade with the bigger ones and go home.

First aid duty brings an epileptic fit and a competitor who is also a paramedic running. Good job really, as that’s a bit out of my sphere of experience. I’ve only done a council run emergency first aid course.

Our members are looking ace in their new polo shirts, even though they are a bit on the warm side. I get chance to speak to the company who made them and they vow to find something cooler for next year, when of course the weather will be much more typically British and everyone will be asking for club anoraks instead.

L asks if she can watch the dogs compete today, which is not a problem or rather not THE problem. I think the problem was bringing MD to watch Doggo and then allowing Doggo to watch him.

With MD watching, Doggo goes off like a turbo charged rocket on his Veterans course, as if trying to impress him, and for the first time in three years I can’t keep up with him. We mess up jump number five. Where did that start come from? Actually I might ask L and MD to watch again, just next time I’ll be ready for it.

MD is then so hyped up that most of his first course ends up on the floor as he dismantles it. He does calm down though and he’s next two runs are both clear. Wow. They were two tricky courses where I had to shout at him a lot. I figure shouting at him a lot is the way to go.

We get 12th in the Olympia qualifier that is open to dogs two grades higher than him and into a run-off for 9th in his own Grade 3 Agility. A run-off we sadly lose. I didn’t think there was much chance of us going clear twice on the same course but we gave it a good shot.

My brother turns up to watch, sadly as things are winding down so I can’t really show him much. Doggo takes the chance to have a good growl at him, they never have got on since that ‘issue’ eleven years ago. Doggo never forgets.

Then it’s time to pack up and then to head home. Show done for another year.

Four more stalls arrive this morning and I have trouble fitting them all in because all the existing ones have spread themselves out to an excessive amount. A least the ice cream man seems happy today, as he sits counting his money. I tell him that there have been complaints that he hasn’t been giving our club members the agreed 50% discount.

I look around his van and can see now evidence of any prices on display at all. He explains that this is because he charges more at shows that his street price but he assures me that he’s been honouring the half price offer, charging £1 for a £1.50 cone. Err ok... I guess maths isn’t his strong point. I give him a quick lesson.

Today first aid duty brings a trapped finger and no ice packs to treat it.

The show itself is going well though. Everyone seems to like the new trophies and rosettes. Today even I get a rosette as MD comes 10th. That was after two rather frustrating runs but at least we got the third one sort of right. Doggo is clear too, of course.

Then at around 7.30 in the evening the heavens open and rain arrives. Well it’s more of a monsoon actually and it last for a full eight hours.

We head off site in the car and drive to Burton. Where after a few failed attempts to find a pub serving food we opt for the liquid option whilst we formulate another plan. The curry house we can see from the pub looks the best bet.

It is and the food is very nice too. Good call.

We head back via a look at the 24 hour Thunder Run, which is taking place across the road from our show. I’ve always wanted to do this but I’m not jealous tonight as the runners valiantly soldier on in the torrential rain.

It’s nice, dry and cosy in our tent though. In fact it’s all very seductive with the elements doing their worst outside.