It’s Halloween and the ghouls are out supporting in force at Long Eaton parkrun. It’s not often you get to high five Frankenstein, twice.

L is distracted by running with a friend and gets a big PB taking over a minute off her time. MD also runs a PB despite having to drag me around. So it's well earned bacon rolls and coffee all round, all for £2, afterwards.

Derby are again impressive in a 3-0 win over Rotherham while L is slightly less impressed with Daniel Craig as James Bond at Quad.

We have another Saturday night in with our separate challenges of a dog show and a race tomorrow.

Ready For My Weekend Ride

I’m on the bus as I’m pedalling at the velodrome tonight and I head straight there from work for the session which starts at 6pm, ready for my weekend ride, as they say. Bike manufacturer Colnago have clearly tapped into this thought... 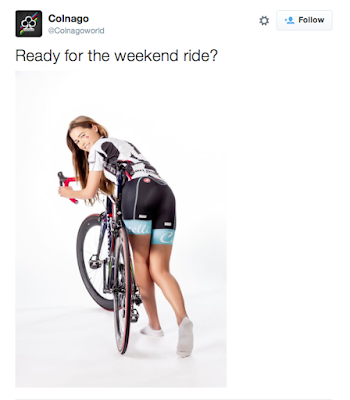 ...and have since apologised for their ill thought out advert having quickly got the publicity they intended.

Had they worded the caption a little differently it may have gone under the radar completely but that probably wasn’t their aim. They may, of course, have been planning to run a second ad of a similar picture starring a hunky lad in Lycra but now we’ll never know. I really don’t have a problem with this sort of thing as long as it works both ways. Now if only she’d move over a bit so that we can get a better look at the bike.

Tonight’s track session is apparently a level B session, the last one I did was for both A’s and B’s. So tonight I’m with the novices... and it’s a little easier than the last one. I do much better in the sprints and in the Keirin. There’s no Elimination Race tonight which is a shame but they do give us tips on nutrition, training and the like. They also give lessons on using the rollers to warm up. I gallantly have a go with not much success but it’s something to work on.

My Dad again comes to watch and L collects me afterwards, after getting her own training in by running around Pride Park.

I just about timed it right on the bike and avoided the worst of the rain. It was bright and sunny when I left but the rain chased me all the way to Derby.

L enters the Dirty Dash at Holme Pierrepont. I shall come and watch that, it was great fun last year. I’ll even offer to hose her down afterwards.

Tonight though it's not hoses that are required but duct tape. She asks to be taken in hand and suggests those sorts of measures. Sounds like quite a night.

She is referring to her inner plague of locusts, if you follow, So I ban her from the kitchen, I’m cooking tonight, but she heads off to the gym for an hour anyway because there's nothing to eat there. When she gets home I escort her straight to the bedroom, nothing to eat there either.

It’s too wet to bike today but then I need the car anyway. Derby County are running a Fans Forum this evening and it sounds like it will be well worth going. There's been a ballot for tickets but I manage to get a couple.

After work I head to my parents and pick up my Dad who will join me at the forum.

The line up to be shot at or praised consists of the Chairman, Head Coach, Chief Executive, Chief Operating Officer, Finance Director and the Academy Manager. There is also a host of other members of staff with whom we can mingle.

It is an impressive attempt by the club to be more approachable and its informative evening. They even give us a free pint.

At home, it’s such sad parting as L posts back her oh so pretty (but squeaky) trainers... but the new ones are on the way.