L runs with MD again this morning and they both seem to enjoy it, both returning home with their tongues trailing out the side of their months, well sort of.

At lunch, for once the pub seems to come up trumps with the food. They seem to have not one, not two but three people working in the kitchen today. Wow. Consequently lunch is delivered much faster and it's also much bigger, we can barely drag our bellies back to work for the afternoon.

I attempt to work some of that off as I cycle home on my wonky bike, pedalling wildly in low gear only. That may have been a good warm up for squash though, as opponent is seriously worried as I take a 2-0 lead. He still wins of course but it is moments like that that I live for.

Then we stay in the pub to avoid the trick or treaters who no doubt will be out in force prowling the streets but at least they should all be in bed by 9pm.

Some Repair Job That Was


The temperature seems to have dropped so not only do I have to transfer a lot of items from my best bike to my non-best bike, I also have to dig out some warm kit. All this sorting out makes me late and even then I’ve forgotten my tyre levers. So hopefully I won’t get a puncture.

Also my bike computer isn’t working but worst of all, the bike, that has just been repaired, won’t shift on to the large chain set, so I can’t get into the higher gears. Some repair job that was and I can’t adjust it because they've also chewed up the adjusting screws.

So I pedal to walk on the small chain set, at times spinning my legs madly like a teenager. At least it was a good cardio workout I guess.


I need to swim more because somehow I need to build up my strength and distance for this Outlaw Half thingy next year and to stop my arms killing me when I do a mile in open water. So perhaps Tuesdays should become swim night...

Unfortunately I struggle to swim on a day when I’ve cycled because my calves just cramp meaning 20 lengths is about my limit and I’d like to do about 40. So with less cycling this could well send my overall fitness down the pan.

So I drive to work and then head to John Carroll pool afterwards with a pull buoy under my arm (look it up). The pull buoy is supposed to go between your thighs therefore rendering use of your legs pointless thereby increasing your arm usage and therefore improving your arm strength. That’s the theory but a detailed explanation of this theory was clearly contained within a chapter of the O level Physics text book that I didn’t get to read because the reality is that keeping it between your thighs for more than a couple of lengths is not easy at all. So another thing to practice.

After this I have a gig.


Tonight’s support Patrik Fitzgerald is, it is fair to say, more of a poet than a singer and one that delivers his prose deadpan style. This he does tonight over an electronic backing track for the first 25 minutes of his set. It is only then that he picks up a guitar for the remainder of his set, a 15 minute segment that includes a cover of the obscure David Bowie track ‘After All’.

There is no doubt that Fitzgerald has talent and he is clearly held in high regard by a lot of the audience but his style of delivery perhaps does not quite endear him to the majority, causing many to talk over his set this evening. Subsequently the nuisances of a lot of of his songs are lost in the general noise.

Fitzgerald hails back from the start of punk circa 1975 but despite several attempts he failed to form a band with anyone and subsequently never became a household name like many of his peers. Instead he became a bit of musical loner albeit a quietly revered one. 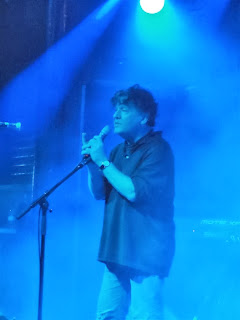 Although he leaves the stage tonight to a roar of appreciation perhaps he was the wrong choice as a warm-up act. The Rats are going to have to do that job themselves.

And so it is with the classic ‘(I Never Loved) Eva Braun’ that The Boomtown Rats open up tonight on their first UK tour in 27 years, at least one with Sir Bob at the helm. Looking at the size of the crowd in Rock City tonight, a near sell out, it is a welcome one. Followed by ’Like Clockwork’, The Rats quickly have Rock City warmed up, alive and screaming lyrics back at them. 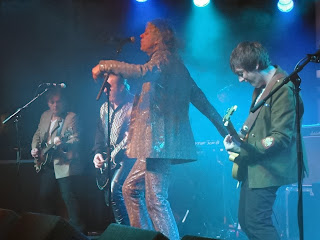 It’s apparently a newly refurbished Rock City as well. I can see it’s been spruced up a touch and they've moved some stairs but I can confirm that the floor is still pleasantly sticky.

It’s a quartet of Rats tonight, this reunion is minus guitarist Gerry Cott and keyboardist Johnnie Fingers and we have two (talented) imposters in their places. Helpfully, just in case you can’t remember what they looked like back in the day, there’s a video screen replaying clips throughout to jog your memory.

Geldof as ever is the star, pouring every ounce into his performance while the rest of band stay extremely low key. He may well now look creviced and lived in but he still has a good head of hair (jealous), yet at 62 he still pulls off a lively stage presence in his f**k off pretend snake skin suit (his words). His ego too is more than intact. 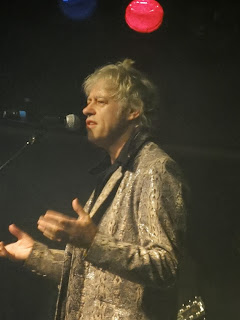 ‘We are the Boomtown Rats’ he tells us. Yes we know.

‘We are magnificent’, if you say so.

‘We are old’ someone shouts.

Yes, Bob agrees ‘We are old’ before hitting us with a terrific ‘Someone's Looking At You’, the stand-out track of the night... or was that a tremendous ‘She's So Modern’ or was that... they have picked such a good set tonight, pulling all the tracks bar ‘Banana Republic’ from their first three pre-1980 albums that it’s hard to choose. 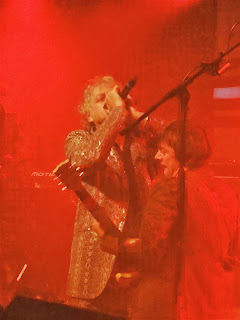 Almost everything is sung straight back at Geldof but none more so than on ‘I Don't Like Mondays’. Which I’m glad to say appeared mid-set rather than being held back to be a predictable finale.

The entire crowd are word perfect on ‘Mondays’ and lift the roof off Rock City but the Rats own rendition tonight is so good that you have to eventually shut up, stand back and let the band wrestle back control, which they do in some style. Absolutely brilliant. Following that is going to be hard.

Having it mid-set should have perhaps stopped it totally dominating proceeding, in theory, but it still lords it over everything else from there until a rather brilliant finale arrives.

True, the excellent ‘Mary of the Fourth Form’ goes off at a rather unnecessary and unsatisfying tangent lurching into the likes of the Rolling Stones, John Lee Hooker and Golden Earing but the band are bang back on track for ‘Looking After No. 1’ and the closing ‘Rat Trap’. 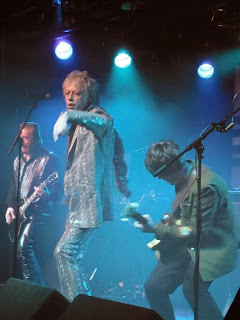 They were soon back for an encore of ‘Never Bite The Hand That Feeds’ and an amazing ’Diamond Smiles’, which was set to send everyone home smiling from ear to ear.

That they came back again, very quickly, and delivered one more song that was a new track simply entitled ‘The Boomtown Rats’ was a slight disappointment. Geldof had apparently been persuaded to write a few new tracks to go on their latest compilation album. So I guess they ought to try and sell a few copies of it but it actually left us with a rather downbeat ending to what otherwise was a totally brilliant evening.

A Touch Of Something


I think I must have a touch of something. A slight temperature and a bit of a headache. It’ll pass.

Apparently St Jude isn’t coming now. The storm has veered off towards Scandinavia instead. It’s a bit of a shame really; I do like a good storm.

MD is his usual frustrating wayward self. I might swap him for an eagle. I think the chap at Warwick Castle yesterday had less problems.