Yesterday L gets a leisurely 12.30 start for her triathlon. This morning I am up even before Doggo. It’s 4:15am when I awake to the sound of rain pounding on the roof. It’s the day of the third Outlaw Half and the first to come with bad weather. Joy.

I suppose the rain doesn’t make an awful lot of difference to the swim. Although the wind might, as there does appear to be a few waves scuttling across the swim course but again you can’t really tell once you’re in there. In any case, I’m capable of near drowning in a mill pond. 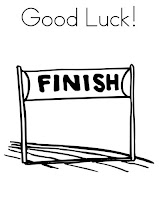 The swim is the usual combination of elbows in the face and feet in the stomach, just all served a bit colder than last year. My swim disappoints a touch, four minutes down on last year at 43:06. I’ll blame the weather.

My swim to bike transition is down on last year too, I take a terribly leisurely six minutes. I’ll blame the weather for that too.

The bike is my favourite bit and still is, even in the rain which has now become intermittent. Every time you think it’s stopped, it comes back to give you another drenching. It’s not as bad as last year’s Sundowner and again the rain isn’t really the problem unless you’re one of the poor guys who overcooked it and finished the race in an ambulance.

The problem is the wind. It was often a case of simply head down and pedal aggressively into it. All you could do was pin your gaze on the bike and the rear end of the person in front of you, which are all helpfully named so that you can curse ‘Wayne’ when he zooms past you and disappears off up the road. You don’t follow too closely of course because that would be classed as drafting or alternatively perving. Nonetheless I would like to pay thanks to the bottoms of Tamara, Rebecca and Rob! Whom kept me going but whose faces I never saw.

My bike is four minutes slower and yes, I’ll blame the weather.

I had promised myself to do a decent swim and an awesome bike, so that I could take the run steady to preserve the knees for next weekend’s Ramathon, which I really really want to do.

Having done a less than decent anything so far, Plan A is already in the bin. I try and have a strong run whilst trying to run on the grass as much as possible to protect my knees. Yes my run is also slightly down on last year and I can’t blame the weather any more as it’s fined up now.

So I miss six hours by as much as I coasted under it last year, yet still had a brilliant time as this is such a brilliant well put together event.

I finish and immerse myself in the post-race wonderland, where there is post-race chilli/curries/pasta etc on tap, teas, muffins, folk willing to rub their hands over whatever you like (within reason) and Erdinger alcohol free everywhere. Actually it’s a shame they couldn’t have got some Erdinger not alcohol free in for afterwards. 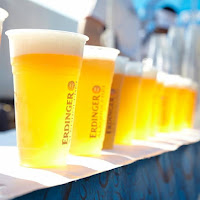 That problem is solved later in the Peacock with a few OP’s. Then we have a meal in Singhs, who serve a decent curry despite the annoying adverts they show at the Broadway Cinema. Had it not been for those adverts we may have tried the place months ago!

It’s the morning of  the Nottingham ‘Piddly Little’ Tri and we’re at Parkrun. Obsessive? Well, L's not actually getting a crafty Parkrun in first, she scanning bar codes for them. Her event doesn't start until a leisurely 12.30.

Unlike the rather wet outlook for my race tomorrow, today is glorious sunshine for hers. We arrive and I head off for my briefing at 11am whilst she gets herself ready for her actual event. Their briefing will be on the start line.

L is probably still proclaiming that she can’t see further than next weekend’s Hellathon as awaits the start covered in her race tattoos. They’re very fetching, she can keep those on for later.

The dogs and I put on our 'we are supporting...' stickers and settle in to watch.

My girl has a solid swim and a great run. It’s on the run that she’s rapidly reeling people in and even the commentator comments on that. We just need to work a tad on the bike leg... but that's not going to be an easy subject to broach to a cycle-phobic.

I grab a pre-event massage and a young girlie lathers me up with dog oil. 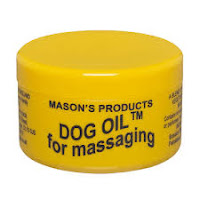 Slightly appalled at what she smothering me in I double check that it is not (a) a product designed for using on dogs nor (b) a product made from dogs. She assures me it’s neither and it’s from Yorkshire, which explains everything. Then she digs her thumb in my calf to shut me up.

Actually she’s very gentle, which may or may not be what I need but it’s not what I’m used to with Dancing Boy, my usual torturer. When she’s finished with my calves she also asks if there’s anything else I’d like massaging as we have five minutes. All this customer service for a tenner but I decline her kind offer. I mean what’s five minutes.

I am sharing the massage tent with a chap with a very swollen ankle who is getting it professionally taped up. Apparently he injured himself at one of those dangerous parkrun things but he’s hopeful of completing the swim and the bike, then ‘seeing how it goes’ on the run. Badly I would guess.

L then leads me astray and takes me for two very welcome and calming pints in Stapleford before pasta back home.

More By Accident Than Design


I’m still tapering on the bus and again considering a lunchtime run but again I don’t risk it. The new sensible me.

Its rains on me, of course, but this is nothing compared to what it’s apparently going to do on Sunday. Great, another wet bike ride.

I get an email from the Great Manchester Swim people proclaiming ‘Five weeks to go’. Eeek! Entering such things is part of the old unsensible side of me.

Another Friday, you can never have too many Fridays. I offer L a pasta night ahead of her event tomorrow but she gives that suggestion short shrift. Friday is Thai night, regardless of the event.

Not a problem. Glad to be of service.

She even ends up being AF, more by accident than design. She just doesn’t seem to get around to it. Never mind, more units for the rest of the weekend.