A Touch Of Vice

I definitely needed to be running today and it was to have been the Clumber Trust 10k again, and I probably ought to be going round it twice e.g. six laps of the circuit we already do three times. However the car being ill has now put paid to this.

It’s not really worth risking an ‘unnecessary’ trip up to Clumber which is an hour each way. I do a run around Wollaton Park with the Lad instead. Which is around about 10k and probably far faster, thanks to the Lad, than I would have ran at Clumber.

In the evening we are again at Broadway.

Not so Adam McKay's Vice, which presents an entire charge sheet against the man. It will depend what your persuasion is politically whether you believe him or not. He also admits right at the start that he's up against a very secretive man who was also meticulous at covering his tracks.

This is McKay's follow up to the outstanding ‘The Big Short’ where he made mortgages almost enjoyable. The film is narrated by a fictional character called Kurt (Jesse Plemons), whose connection to Cheney isn’t revealed until much later in the film and makes for an interesting plot device.

It is Rumsfeld who inaugurates Cheney into Washington in the first place and continues to pop up throughout the story. Then there’s Cheney’s wife Lynne (Amy Adams), who is almost as ruthless as Cheney himself.

The story gets even more interesting (and more controversial) when we get to George W. Bush’s (Sam Rockwell) presidency where Cheney reshaped the role of Vice President from merely a ceremonial one to one with real power. That is all the powers he wanted and Cheney seems to manipulate Bush at will. The Bush period is clearly the film’s main target and questions this administration on almost everything but most specifically on 9/11 and on Iraq.

Say what you like about his politics and his morals (or lack of them) but Cheney certainly knew how to take his opportunities. The only handbrake on Cheney’s ambition comes when he considers the effect his career would have on his daughter Mary (Alison Pill), a committed lesbian and very much pro same-sex marriage which certainly isn’t the Republican Party’s line. Yet he ditches even those considerations in the end. 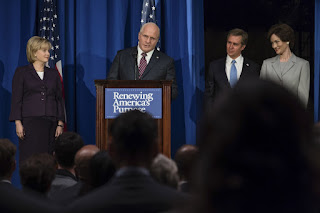 Going back to a Republican Party focus group that appeared earlier in the film, this group are now discussing the film itself and coming to blows about it. Apart from one young woman who, looking bored, turns to her friend and says she really wanted to watch the new ‘Fast and Furious’ movie. The message being that she’s not really interested in what matters. A message that could just as easily be applied in the UK at the moment.

A very decent film with Bale, if you can spot him under the make-up and padding, excellent.

Afterwards we again go in the Hockley Rebel for one and even L has a beer. She hasn’t had much this year apart from developing a slight addiction to Mackeson Stout which is usually a sign you’re pregnant but I don’t think that’s the case here.

Naturally hers is much nicer than mine as is usually the case. Hers is a doughnut beer to my sour cherry one which not surprisingly tastes sour.