As is usually the case Derby County follow up successive 3-0 and 5-0 wins with a 3-0 defeat at home to Burnley. I didn’t see that coming but I really should have done. We’ve been here before, numerous times, but you keep hoping your team has turned a corner. Sadly not.

When you go see your first film for ages, you've got to make it a good one or if not a weird one. So Upstream Colour, which falls mainly into the latter category.


A lass called Kris (Amy Seimetz) is accosted by a man known as the Thief (Thiago Martins) in a night club and gets a worm forced down her throat. Once in her body this worm grows inside her, seems to brainwash her and allows him to control her. He then assigns her a series of odd tasks including making her write out each page of Henry David Thoreau's book Walden, a book which pops up frequently throughout the film. Then he sends her off to the bank, where she signs over all her money to him.

Once she's penniless, he leaves. A nice sort of twist on the woman emptying her bloke’s bank account via his credit card I suppose. He leaves her in a bit of a mess, in more ways than one. She can feel the growing worm travelling under her skin and takes a carving knife to her legs.

At this point, another man, The Sampler (Andrew Sensenig), draws her to him by broadcasting the sounds of natural, that he has recorded, back through some big speakers. He takes her to his pig farm where he surgically removes the worm from her body and transplants it into a pig. It appears that he has a group of pigs that are all connected to different people who have suffered the same fate. 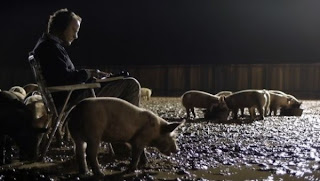 Now no longer physically infected, Kris tries to return to normal life and her job but as she's been missing for some time, she loses it. Then she meets Jeff (Shane Carruth) on a train. At first she tries to ignore him but they already seem to have a connection. It turns out he has also been a victim of the same ordeal. Together they attempt to rebuild their lives and make sense of what has happened to them, as do we, the viewer. 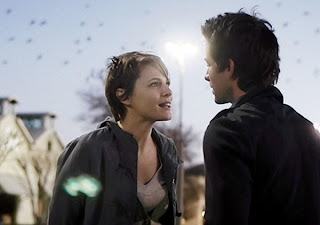 It’s the sort of film where the viewer is supposed to fill in all the gaps. It needs your full attention to attempt to do so and there's not a lot of dialogue to help you out. The film is clearly meant to be puzzling and on that basis it succeeds greatly.

The Sampler, as well as being her rescuer, also seems to be the source of the worm drug. So maybe this is a film about drugs and drug dealers? After all drugs do make people do mindless things, bankrupts them, leaves them under the control of their dealers and even if they recover, they are never the same people again. Possibly.

It’s engrossing but it's not a film that the majority of film goers will appreciate due to its lack of car chases, explosions and general absence of straightforward-ness plus the buzzing of the constant ambient soundtrack will give some folk a headache. Yet, in a year where everyone is making sequels or remakes it's good to see something refreshingly different and outlandish like this.

Despite having a race on Sunday, the John Fraser 10 Mile, I decide to bike anyway even though my legs will may not have fully recovered by then. I can’t afford to be half-arsed now that I’ve got a (not so) Half (arsed) Ironman to train for.

A night in tonight, we haven’t watched Top Of The Pops for ages. So we haven’t been getting our fix of John Travolta and Olivia Newton John.
(Friday 30th August)

Posted by FitForNothing at Friday, August 30, 2013 No comments:

Hung Out To Dry


On the bike today and as I record today’s mileage in my cycling log, I discover one bit of good news. At 1656 miles cycled so far this year, I have already exceeded 2012’s appalling total of 1628 miles. I’ve still some way to go to get up to previous years' totals but there is still four months of the year left to go.

L gets some foreign currency for this weekend’s trip to Budapest. Most vital is the 1000 HUF (Florin) note for the deposit on the timing chip. 1000 HUF is the princely of sum of approximately £2.85. They charge you about £15 for a chip over here, so it's almost worth keeping them to put on ebay.

We need two of these but it was hardly worth going for just £6 worth of currency and L comes back with 16,000 HUFs. She expresses gratitude she’s not Hungarian, imagining how many thousands she could be overdrawn.

Back on the bike, I have a bit of a race home with someone from Beeston CC which is always nice. I got hung out to dry obviously, but you have to give it a go. Now all I’ve got to do is recover in time for tennis.

During which I was enjoying my impending 6-1 6-1 defeat until repeated attempts to lose by such a score line came to nothing as I went from 4-1 down to 5-5 in the second set amidst the gathering gloom. Unfortunately getting a full game in while starting at 7pm is going to get increasing difficult as the nights draw in.

It was only when we changed ends that I realised how my opponent had gifted me the last two games. Near zero light at the far end of the court apart from a bit of dazzle from the lights on the floodlit courts. This resulted in the ball being largely invisible until it reached the back of the court. Suspiciously my opponent hit everything short and completed the win 7-5.

I'm not sure.Ask me again in June, this is of course the Outlaw Half on 1st June next year, or maybe ask me again in March when I’m trying to cram in the training whilst all the roads are covered in snow and ice.

She also asks if she can be my understudy in case I snap my calf again and then my entry won't go to waste. I’m happy to share my training schedule with my understudy; we could train side by side. For some reason she finds that though quite amusing.

The next time I look at the website, to check if the humongous amount I’d paid was actually for the half and that I’d not entered the full by mistake, I see that the event is already full and was so by 10am this morning. Blimey.

I run tonight but keep it a bit shorter and get on the bus at Risley, so that’s about 7.5 miles. L walks the deadly duo down to meet me off the bus.