Another Wet And Windy One

L is about to cancel her running plans but I assure her that the BBC have said it will stop around 5pm. They have occasionally been right. In fact I’m sure the wind and rain is already abating slightly. She should be raring to go after her quiet weekend.


After a suitably long and refreshing lie in we head back to the Velodrome for another Couples Cycling session before L’s five dayer runs out. This time we ride side by side on Watt Bikes. If only we could do this on the road or the track even.

Then we head over to Manchester to visit Daughter and to see her new place. We find an excellent real ale pub that we haven’t tried before called the Fletcher Moss in Didsbury. We also find an Indian called the Sangam that does a decent curry too.

For saying we had nothing planned this weekend, it’s been very hectic.


This morning there’s the Forest Rec Parkrun where I support both L and the cafe. Then L heads off to Pilates and the début of my squash opponent at the session. Should be interesting.

I head home with the boys before later heading to the opticians without much hope that they can do anything for my eyesight which is fading fast on both fronts, long and short sight. I see my fourth different optician in five visits which isn’t good for continuity of treatment but this chap dispenses with the ‘letters board’ and instead takes me out into the shop where he asks what I would actually like to see. I like his style and he promises to sort me out with a trial pair for next week.

I have taken up the Derby Velodrome’s offer of 50% off a three month gym subscription. So that’s the winter training sorted as just the act of joining a gym gets you fit. Isn’t that how it works?

Apparently not. So today, with L on a five day freebie trial, we head there for a couples cycling session on the indoor Watt Bikes. I ride behind her so that I can keep my eye on her. Then later we head to Broadway.

In Brooklyn in 1957, Rudolf Abel (Mark Rylance) is arrested under the suspicion of being a Soviet spy. James Donovan (Tom Hanks) is a mere insurance lawyer who is asked to defend Abel in order to show the world that the American justice system is just and fair, even though the public have already convicted him. 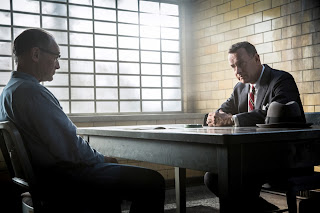 Donovan may be defending the most hated man in America but he wants to do right thing, legally, by his client. That isn’t easy when even the judge has already reached his decision.

When Abel is convicted Donovan has the foresight to persuade the judge not to send him to his death. He foresees a time when having a Soviet spy in your jails could be useful. 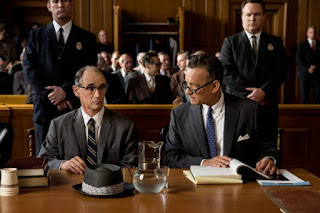 Donovan is vindicated when an American U-2 spy plane is shot down over Soviet territory and the pilot, Francis Gary Powers (Austin Stowell), fails to destroy both the plane and himself, as ordered. The Soviets capture Powers, convict him as a spy, and send him to prison.

When the Soviets get in touch with Donovan, he is sent out to East Berlin to negotiate a prisoner exchange. This he has to do as a private citizen rather than an American official. Any deal is further complicated by Donovan’s wish to also release another US prisoner, a student called Frederic Pryor (Will Rogers). 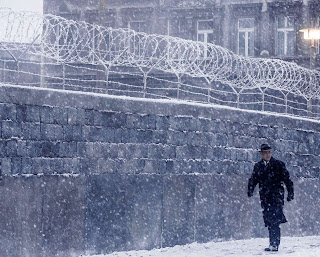 Overall it is pretty good film if you can cope with the large dose of American patriotism that it comes served with. Patriotism that attempts to paint the East Germans as clowns which I'm sure they weren't. There’s also the totally over the top (and unnecessarily so) crash scene of the U-2. This is the only nod to your typical Hollywood action movie which this thankfully isn’t. The rest of the two hours is mercifully free of any other such gimmicks. 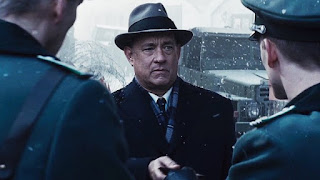 The film seems to be largely historically accurate and the cinematography is fabulous with some great scenes of cold war Berlin such as the construction of the Berlin Wall, Checkpoint Charlie etc.

Tom Hanks is solid as Donovan but it is Mark Rylance who shines out as the star of the film. His understated performance as Rudolf Abel is pure class. 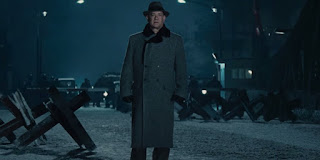 ‘Bridge of Spies’ shows that the power of a good story can still stand up on its own even in modern day Hollywood.


We have a few beers afterwards in a very busy and slightly riotous Peacock. The OP isn’t up to scratch either.