With Broadway shut we aren't getting our usual fix of films but in an attempt to try and keep them in business we renew our membership anyway. In return they continue to send us their weekly emails with links to the films that they would have been showing, so that we can stream them along with discounts off the various streaming sites.

The first one we watch is Vivarium.

Gemma (Imogen Poots) and Tom (Jesse Eisenberg) are a young couple desperate to get on the housing ladder. They wander into an estate agency staffed by Martin (Jonathan Aris), who looks like he’s just come straight off the set of Book Of Mormon. 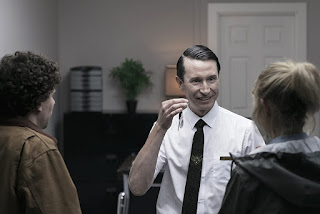 Even though it isn’t at all what they are looking for, he persuades them to visit a new housing development called Yonder. Yonder is Suburbia on speed with its rows of identical houses with their identical white picket fences and identical manicured lawns.

They are shown around No 9 which is like a show house with everything ready for a couple to move in and complete with a spare bedroom ready for child number one.

When Martin simply disappears, Gemma and Tom can’t wait to make a run for it but they discover that escape is not possible. Every road leads back to No 9 and after driving around until it gets dark, they run out of petrol right outside No 9. 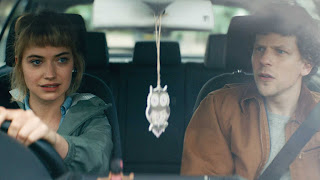 The next day, Tom climbs on to the roof where he sees nothing but more identical houses, so they decide to follow the sun to find a way out. They walk across identical garden after identical garden, always climbing over the identical fences using identical white plastic chairs. When they finally find a house with some lights on, it’s No 9.

They discover that a box is left outside the house every day containing food and other provisions. The same food and provisions, day after day. Then one day the box has a baby inside it with a note saying, 'Raise the child and be released'.

If you assume that by merely having entertained the ‘dream’ of suburban living ‘sold’ by the estate agent and subsequently found themselves trapped in it then the last thing they should now do is to agree to raise the child. After all, why would you move to suburbia in the first place if the next step wasn’t to have a child to occupy that spare bedroom? 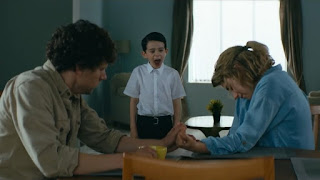 Out of compassion (I guess) they accept the child, thereby trapping themselves more deeply because having the child piles further demands on them. The way Tom and Gemma deal with those demands is by reverting to stereotypical gender roles.

Gemma cares for the ‘Omen’ child or at least tries to reason with it, as it grows at the rate of a dog and screams at the top of his lungs until it gets what it wants. While Tom digs because it makes him feel like he's doing something, and that is what men do. 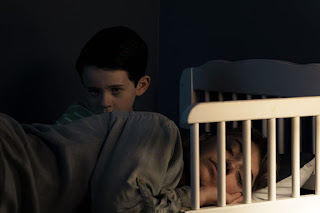 As the child grows up into a Martin clone it all ends rather brutally as, with their roles affectively fulfilled, they are 'released' but not before we get an insight into other couples doing exactly the same thing in exactly the same trapped environment.

I thought it was a fascinating film, in the vein of the Twilight Zone or Black Mirror. A film about the treadmill of life, that life itself is a trap.

Where many films these days are remakes or sequels any film that dares to be different should be applauded. Vivarium gets a standing ovation from me.
Posted by FitForNothing at Sunday, April 05, 2020