The week starts with what is known as Blue Monday, which is supposedly the most depressing day of the year. Seems just like any other Monday to me.

L livens it up with ‘Get Buzzin’ With Bez’. Bez from the Happy Monday has launched a workout routine after apparently two and a half years of sitting on the sofa. He says to get fit to keep up with his personal trainer girlfriend who is 22 years his junior. More importantly to L, he has a sausage dog.

My parents get their first dose of the Oxford–AstraZeneca vaccine on Friday while L’s parents get theirs on Saturday. Even L is impressed with the smoothness of the system they have going at Derby Arena. The dose takes up to three weeks to kick in, so I do hope that both sets of parents are responsible and don’t go out on a bender just because they've been vaccinated.

We stay in to have our bender, just a mini one as more Christmas Ale arrives from Lenton Lane Brewery which they have now rebadged Winter Ale. This is at L's request. She does like something with a bit of spice.

Britain announces it is thinking about shutting its borders and maybe quarantining everyone who arrives. You know like all the successful countries did back last March.

Meanwhile we’re not even supposed to travel to Derby where they have set up a Six Pack Challenge. At least this gives my knee more time to recover.

The week that started with Blue Monday ends with White Over Sunday as we get a decent covering of snow. 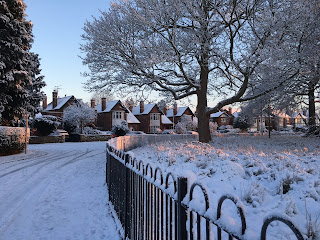 I take the boys on the park for a ball session and a walk while L does a one-to-one meet up with Daughter, keeping well within the rules by walking there. 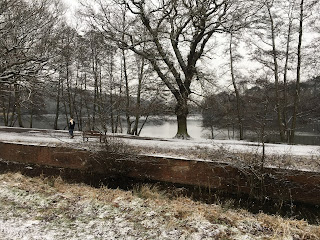 I’m not sure many others are being as compliant judging by the groups on the park which are small but not looking particularly household-like. 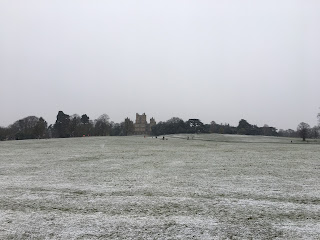 Posted by FitForNothing at Sunday, January 24, 2021