I continue my haphazard training regime this week. Cycling on Tuesday and running from work on Wednesday where I manage ten miles which disappointingly isn’t to the centre of Long Eaton which was my target. That was only nine miles so I had to keep going a bit further.

The dogs don’t have any mercy on me as we hobble around our walk the next morning where we meet two dogs we don’t like and two cats as well. There are no cats that we like.

I add to our Commonwealth Games tickets with some for the England v New Zealand netball game.

The car goes in for its MOT on Thursday and just like last year I hear nothing from the garage all day and then they ring me about 4pm with a list that I don’t get time to think about. This actually does them out of money as I just get the bare minimum done.

On Friday we chaperone Daughter (and her car) up to Ashbourne which gives us a brief night out up there. Although to my horror I see that there isn’t a single Good Beer Guide listed pub in Ashbourne. The best they appear to have is a craft beer bar called the House Of Beer that has ten keg lines. Thankfully it turns out to be excellent. 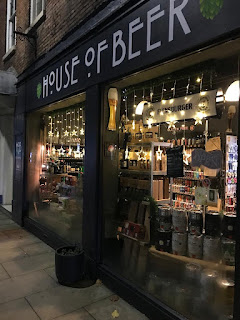 Not so excellent is the Mango app which locks me out again just as we're trying to get the bus home.

On Saturday we go to Alvaston parkrun for the first time since the initial lockdown and where I know they’ve really missed the Lad.

Posted by FitForNothing at Sunday, November 21, 2021