L says she’s not counting (although she does have a spreadsheet) but it’s 2738 days to retirement. I assume that’s to the state date as she’s on about going part time from May this year. That’s just 181 days away.

I see some mince pie flavoured chocolate digestives in Sainsbury’s, which is just wrong. 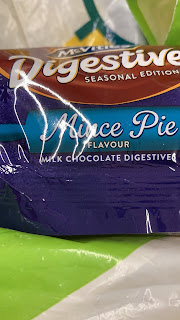 On Sunday I was on call for some testing one of our customers was doing but they never contacted me, so I assumed it either didn’t happen or it went well. Then on Tuesday when I get in the office it is to find loads of emails from the same people after something went wrong when they started testing it on Monday night. Nothing like thorough planning.

On Tuesday afternoon I have my latest physio which was a bit pointless really. The ‘main’ physio didn’t really know why I’d been referred back to him from ‘movement’ physio and nor did I. He offered to refer me back to again but I declined. I’m beginning to feel as if I’m the ball in a game of ping-pong.

He did offer me a painkilling injection which I also declined, so instead he gave me yet more exercises but mostly variations on the current ones. I’ve just got to keep building up gently, which is code for not running with the Lad. They will keep my case open for six months then it will be closed if I don’t request another appointment.

I’m on the bike on Wednesday which is the same day L’s Dad moves into the care home.

Posted by FitForNothing at Wednesday, November 10, 2021