There are two support acts Kelsey Karter with her band and Idolising Nova. Unfortunately Karter is on at 6:45 which isn't conducive to those of us who work. This also enables those that don’t and/or the students to get there first and grab all the best spots. So I am unusually a fair way back for this gig and for once feeling a bit old amongst a very young crowd.

Idolising Nova are Jack Fulton Smith and Kyle O’Sullivan, they hail from Peterborough, have some decent indie tunes and fancy light show. They are pleasant enough but probably aren't what most of us have come here for tonight. 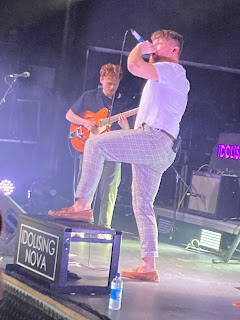 They're certainly not like the Hunna, who open with just front man Ryan Potter and drummer Jack Metcalfe on stage. Potter sits wearing a balaclava in front of a door positioned in the centre of the stage. This is ‘One Hell of a Gory Story’ and that eases us into ‘I Wanna Know’ which is accompanied by copious amounts limb flailing from the crowd. Not with my knees sadly. As I say, feeling a bit old tonight. 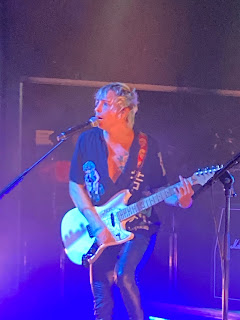 The energy of the opening never wanes and neither do Potter’s lungs, which are highly impressive. An honourable mention too to guitarist Dan Dorney who matches Potter bounce for bounce but the whole band are true performers and clearly love being up on stage while Potter is a real old school front man. 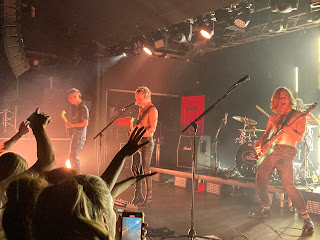 This is another of those tours that never was, so it’s the first time this four piece from Watford have had chance to play the songs from the band’s third album ‘I’d Rather Die Than Let You In’ live.

Although, as with many bands during lockdown, they have already moved on and showed off two brand new songs tonight. One of which is their collaboration with Kelsey Karter, who I missed earlier, called ‘I Don’t Like You, Okay’. 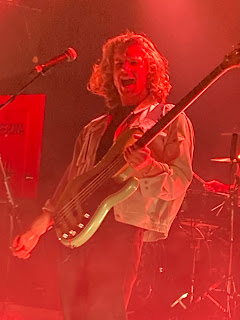 There is still plenty from their latest album, although some of which I find a little bit too plodding... by their standards unlike the explosiveness of their earlier stuff. That said two of the best moments tonight are slower (but older) songs - a sublime version of ‘Sycamore Tree’ and the always excellent ‘Piece By Piece’. 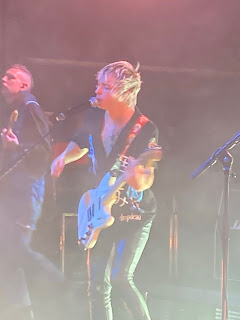 Then of course there's ‘Bonfire’, an awesome ‘Babe, Can I Call?’ and a closing 'She's Casual' with the first verse sung exclusively by the crowd. By the end both Potter and Dorney are shirtless to the delight of most of the girls in the crowd, for some reason.
Posted by FitForNothing at Wednesday, November 10, 2021