Tuesday is the first day back at work after the New Year Bank Holiday. That is if I get there as I have been summoned to the dentist first thing. He had advised me that I needed a wisdom tooth removed not that I was even aware I had a problem with it.

Twenty minutes after my 8:30 appointment I’m back home and still have my tooth. He did an x-ray and decided the tooth was too difficult for him to remove. He therefore needed to refer me to get it done in hospital which will apparently take months. Then he asked me whether it is giving me any trouble, to which the answer is no. So he said if I wanted to I could leave it in, see how it goes and then we’ll review at my next check-up. So it was all a damp squid really.

L is back at proper work, in an office, where she says it’s cold as the heating has been off throughout the Christmas break. A bit like having the kitchen door open at home where ironically we have it shut.

Sadly the Christmas Lights at Wollaton Hall are about to come to an end. 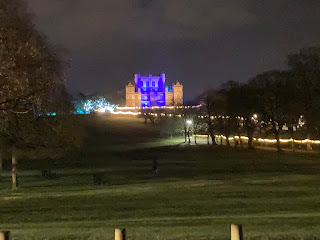 Not that we actually attended as such but it meant the park was open in the evenings and we could walk the dogs up there and see some of the lights anyway. 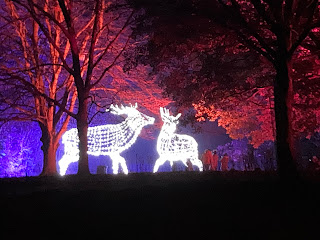 Talking of Christmas lights, my Dad finally gets his working just as Twelfth Night arrives. 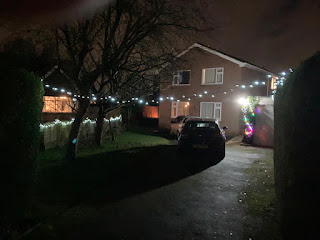 Our milkman who has been coming at increasing weird times, anything from 11pm at night to 8am in the morning, now seems to have disappeared completely e.g. absconded with his Christmas tips. We currently have a different chap in a different van.

On Thursday is snows or something that could have been snow... but was more like sleet... that then turned to rain... Sadly I didn’t get to have a snowball fight with the boys. L got all excited and went for a lunchtime walk in it but just got wet. That’s probably our lot now for the year.

On Saturday I run Wollaton Parkrun which, with L not running at the moment, MD gets a damn good bark out of while the Lad gets a damn lead biting session. MD also gets a new food bowl after he somehow put his foot in his old one and snapped it in two.

Then on Sunday it’s the New Year 10k at Sherwood Pines that L and I ran when I was last marathon training two years ago, for the same race I’m now training for e.g. Brighton. Only last time she was training for it too but now she isn’t. She would have done this 10k though if she’d not had her foot injury.

Posted by FitForNothing at Sunday, January 09, 2022