Slip Of A Girl

By Friday L is germ ridden. We’re pretty sure it’s just a cold and not Coronavirus but am I going to have to take someone else to Berlin next weekend? They might not even let her into the country.

A cruise ship called the Diamond Princess has been quarantined off the coast of Yokohama in Japan after hundreds on board are infected. It is the largest outbreak of the virus outside of China.

On Friday evening I have a match as Derby play Fulham and then on Saturday it’s Parkrun. It will be my 99th and the plan is... well firstly to find one that is still on by permission of Storm Dennis (or actually I think we might be on to Ellen now, not that I noticed a gap). There is a new Parkrun at Lichfield called Beacon but that seems to be off. Wollaton isn’t on because they are hosting the National Cross Country Championships, so we decide to play safe and go to Alvaston.

After parkrun we do head to Wollaton Park to have a look at the Cross Country. This is hugely entertaining because the park is so waterlogged and muddy. Sections of the course are knee deep in water\mud and it makes for great spectating. 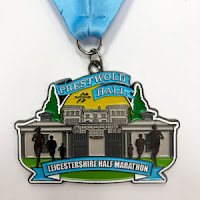 On Sunday I return to Prestwold Hall for RunThrough's Leicestershire Half Marathon. This is of course purely out of necessity and L joins me in the race as well, out of necessity. To be honest it doesn't seem quite as dull after doing it last year probably because I mow know what is coming and can mentally prepare for it.

The one thing that wasn’t quite so bad last year was the wind, which is really hard to run against this year but it’s very nice when it’s behind you and pushing you along. The effect of the wind is probably reflected in my time of almost 1:49, four minutes slower than last year.

Then we head to my Brother’s lad’s 18th bithday meal at the Joiner's Arms in Quarndon. I don’t think I’ve been before but L says she’s been to a disco there when she was just a mere slip of a girl. Which is not that long ago obviously. It’s all food now, and they do have some decent beer, but sadly they don’t do a Sunday Lunch. The foods ok though. Everyone has massive ice cream sundaes for dessert and can’t manage them which means I end up trying to eat about four of them.

Posted by FitForNothing at Sunday, February 23, 2020