Jane (Julia Garner) is college graduate who finds herself working as the most junior of junior assistants for an entertainment mogul in New York. She is first in, last out every day and spends the day doing mostly menial duties - making coffee, photocopying, ordering lunch, arranging travel and accommodation for everyone.

She also gets to clean out her boss’s office which involving wiping the white powder off his desk, retrieving used syringes, scrubbing the casting couch, and picking lost earrings up off the carpet which she then attempts to reunite with their owners. 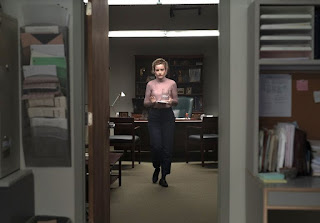 Then she has to fields irate phone calls from her boss’s wife before then getting yelled at by him for interfering in his personal affairs. We see her write two emails of apology pledging to not let him down again, in which she is assisted by her two male colleagues (Jon Orsini and Noah Robbins) who advise her on the content. 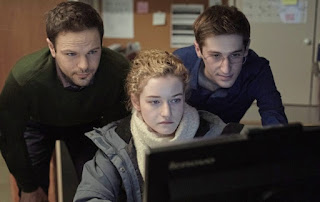 She is concerned when a young actress is flown in from Idaho and Jane is asked to bring her to a local hotel for a ‘meeting’ with her boss which has been moved from the afternoon to evening. She feels she should say something and visits her HR manager (Matthew Macfadyen). 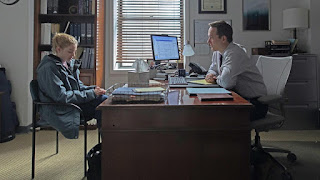 He gives it to her straight and tells her that no one is interested in her concerns. Basically she should turn a blind eye if she wants to keep her job. Keep her head down, like everyone else.

That is the thing. It has been suggested that this film is highlighting the 'MeToo' issue but does it really?

She is treated unpleasantly by everyone in the company, not just by her male colleagues but by her female ones too. Her boss is a sexist, selfish low life but he’s a low life to everyone. Mostly, as suggested, despite a few jokey comments everyone is keeping their heads down which does I suppose make them complicit. 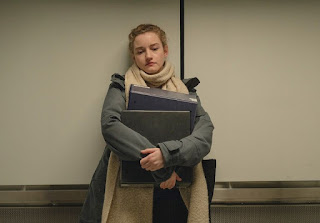 Basically this is a toxic working environment that no one should work in, male or female. I’m not actually sure what Jane thinks she’s going to get out of the job and HR has already told her she’s not her boss’s type! The problem is that she hasn't quit and nobody else has either. Or perhaps I’m just not getting it.

Generally I enjoy slow burning films like this one but it perhaps tries to be a little too subtle and should have dug deeper. While it's obvious who her boss’s character is modelled on, I don’t think there's anything particularly enlightening here.