This year they have moved the May Day Bank Holiday to the Friday to celebrate L’s birthday, which was very nice of them and it wasn’t even a milestone one. It’s also the 75th Anniversary of VE Day which is convenient, not that there are going to be many celebrations this year due to Covid-19.

To be honest VE Day always makes me feel a touch queasy. I'm all for remembering the war effort, both those who died for the cause and those who survived, but I find all this Union Flag waving unsettling.

After all the war was won by a collaboration between over two dozen nations in which, of course, Britain played a major role but alongside huge roles by the United States and the Soviet Union. It may also not be popular to mention the very significant part played by China.

There may not be many celebrations around but, while out on our run, the Lad and I still manage to disrupt a street party. There was a social distanced gap for us to run through.

Daughter comes over with a cake and waves from the end of the drive. That’s for L’s birthday not VE Day, well I assume that’s what it’s for. The Lad rushes out and breaks social distancing protocol to greet her. MD though is still strictly following Government guidelines and refuses to go beyond the front door.

On Saturday L and I watch ‘Kinky Boots’ the film which was made in 2005 starring Joel Edgerton, Chiwetel Ejiofor and Sarah-Jane Potts. I am delighted, and L disappointed, to discover that it isn’t a musical unlike the 2013 Broadway production with music by Cyndi Lauper.

Then on Sunday we watch a film off our unwatched DVD pile. Seven weeks or so into Lockdown and it’s the first one we’ve watched. L produces a short list from which I pick ‘The Clan of the Cave Bear’ from 1986, the fact it stars Daryl Hannah does not influence my decision. She plays the role of a girl raised by a group of Neanderthals. It was considered a box office flop at the time, at least in the US but considering the dialogue is all grunts and sign language which is translated with subtitles perhaps it’s not surprising. It might have gone down better now the Americans are used to trying to understand Trump.

While no one can quite understand most of what comes out of Trump’s mouth, our beloved Boris isn’t a whole lot better. He waffles out a statement telling us we can go to work tomorrow, sort of, apparently, if you can, if you want. 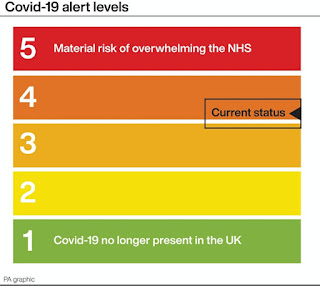