On Friday L gets up really early to trial something called Battle Box which is not a computer game but is something really evil that they do at the gym at 7am outdoors in a howling gale.

Later she tells me how brilliant it was which I’m sure has nothing to do with the fact they gave them all bacon cobs and coffee afterwards. Bacon cobs don’t really sound like much of a fitness plan to me.

It appears I have completely misjudged the council as they have already removed the fallen tree.

Wordle is getting slightly annoying. 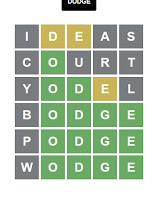 We all have one eye on the Friday’s Women’s Curling Semi Final between GB and Sweden, of course one of us only has one eye. It’s so tense, all square with three to play. Then we’re three up with one to play. As you can tell I was working hard that day. Then it’s back to all square again and into sudden death but we secure victory in the end.

Meanwhile the Men had already won their Semi on Thursday and are into Saturday’s Final which sadly they lose as Sweden’s Men get revenge for their Women’s defeat but that is still a silver medal. I have to break off briefly from watching it to do Parkrun at Wollaton.

Our women go one better as they land a gold medal by beating Japan in Sunday’s final.

I have another run on Sunday which is just a 10k at Victoria Embankment. There’s also a 5k which L was tempted with but £20 for that, the same price as the 10k, isn’t cheap. So she decides to run there instead.

My 10k is pretty dull but it’s a necessary training run.

Posted by FitForNothing at Sunday, February 20, 2022