Echo And The Bunnymen

I have seen Echo & The Bunnymen many times over the years and over a career that goes way back and beyond the release of their first album ‘Crocodiles’ in 1980. It was a few years after that I started seeing them live and they were some of the first gigs I ever went to.

However looking at the diary I have not seen them since 1999, which is very remiss of me. I saw them a few times after they reformed with the excellent ‘Evergreen’ album back in 1997 but not in the last 23 years. Blimey. So in my quest to get reacquainted with all my old favourites again at least one more time, before one of us is no longer capable, I am back at the scene of that last gig in 1999. Although no surprise it’s Rock City and it looks like a sell out.

As they come on the stage something strikes me as odd. Ian McCulloch is up there but not chain smoking and presumably hasn’t in many a year. The stage is still smoking heavily, so no change there, but now it’s clearly all dry ice as since I last saw them the smoking ban has come in. This must have changed his act somewhat and hopefully his health too in a positive way. Yet it’s odd to see Mac stood up there without a fag in his hand adding to the smog. 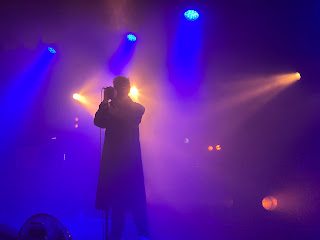 Little else has changed though. The long coat, the sunglasses, even the haircut is broadly the same. Yes he still has hair even at 62. Will Sergeant looks in pretty good shape too.

Talking of ‘Crocodiles’, that’s how we start and how the album starts too with ‘Going Up’ which is followed by ‘Show Of Strength’ from its follow-up ‘Heaven Up Here’ and then back to ‘Crocodiles’ for ‘All That Jazz’. So we’re starting really old school.

But it’s all good and not just because it's a real throwback. Maybe Mac’s voice isn’t quite what it was but no one’s particularly caring.

There’s a brand new newbie ‘Brussels Is Haunted’ before a great finale of a brutal ‘Villiers Terrace’ and three particular faves of mine ‘Nothing Lasts Forever’ from that comeback album ‘Evergeen’ and then the very wonderful duo of ‘Never Stop’ and ‘Lips Like Sugar’.

Another thing that’s not changed is that Mac still rambles off into other people’s songs in the middle of his own. This has always irked me but I guess he’s not going to stop now.

They come back and hit us with ‘The Cutter’ and ‘The Killing Moon’ before doing another very old school thing – a second encore.

They come out one last time to close with the achingly pretty ‘Ocean Rain’. I best not leave it another 23 years.
Posted by FitForNothing at Thursday, February 17, 2022

Labels: Echo And The Bunnymen