The Winter Olympics is now in full swing. It was bizarre to give it Beijing in the first place but now it’s looking even more bizarre as they’ve decided to not invite anyone to it either.

Also bizarre is that if you’re curler you potentially get to play almost every single day so that’s the sport to take up rather than something like snowboarding where you just get a minute or two of competition every four years.

This does make the curling a gripping long running saga. On Monday our Mixed Doubles pairing lose a nail biting Semi Final to Norway. The Lad finds it so stressful he has to sit on my knee throughout which doesn’t make my pretending to work easy. MD vents his frustration by going out in the garden and having a damn good bark at nothing.

Defeat means they play Sweden for bronze on Tuesday. Sadly they lose that too but now the Men’s and Women’s competition will begin. I spend the rest of the day on a training course learning the world’s dullest software. The bright spot of the day is when Derby beat Hull 3-1 later.

On Wednesday I bike into work which was hard. I can’t blame the weather or anything, it was the old man doing the pedalling who wasn’t up to scratch. On Thursday I’m at work again and in the gym, pretending to train. L does an actual real live run.

On Sunday though I have a real live run of my own. Back in February 2020 when I was training for the Brighton Marathon, as I am now because it is two years late, I was down to run the Stamford Striders St Valentine’s 30k along with my (then) fellow Brighton trainees L and her sister. L was to be my 'Valentine Pair' as they have such a thing but now it's just me, 'Valentine No Mates'.

That race in 2020 was cancelled but not due to Covid which hadn't yet reached crisis point but down to Storm Dennis who was throwing a strop with 40mph winds. In the end they ran it a week later, which meant we couldn't make it. Instead I dragged the Lad around a 15 mile tour of Nottingham in the not quite gale force winds.

Now I'm back at Stamford and wishing this year’s was being cancelled as well because the weather is possibly going to be worse than in 2020 just without the gale force winds which means it’s going ahead.

In the morning the temperature is just about above freezing with a brisk cooling breeze and the prospect of heavy rain later. Nice. I come equipped in long trousers, long sleeves and with a rain jacket that in the end I don't use and it stays wrapped around my waist throughout.

The race starts at 11am (a really civilised time) in the dry but the rain does come, although it’s not as heavy as promised, and the 'breeze' makes for a challenging last few miles.

I maintain my ideal 9 minute marathon pace for just the first seven miles before slipping to 10s and then 11s after 14 miles.

It is one of those races that makes you do one last humiliating stagger around a sports field to reach the finish line and as I do so I am shocked to realise that 30k isn’t ‘just’ 18 miles as I thought but it’s actually almost 19 but I should have known that. 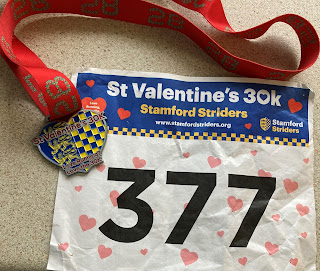 My time is 3:05 which is apparently a mere fraction quicker than L ran ‘back in the day’. If I carried on crawling long at 11s pace it would turn out to be about a 4:25 marathon. Which I’d probably take. That’s if I could continue to crawl that fast.

Posted by FitForNothing at Sunday, February 13, 2022