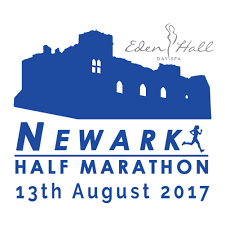 The original Newark Half Marathon ran for many years until 2011 when it ceased to exist. It seemed the organisers had had enough of the endless hassle of organising it. Then in 2016 it returned, albeit without much Newark in it and certainly not the town centre start and finish.

The new race starts in the Sconce Park, on the outskirts of Newark, and the site of many civil war battles which are now being exchanged for battles of another variety. From there the race heads further outwards and despite it being advertised as the dreaded flat and fast, meaning its probably going to be dull, I decide to give it a go this year as part of my Marathon Project.

There is no car parking, so we park in the street and then walk to the start which is buried deep in the park.

The course is almost totally on closed county lanes, if you don’t count farm vehicles. One of which tries a massive reversing manoeuvre mid-race at about the ten mile point. It was sort of all on road as well, if you discount a few minor thoroughfares that hadn’t see a layer of tarmac in twenty plus years and had grass growing through them. Oh, and the entire last mile was a lap of Sconce Park itself, on the grass. Other than that... no complaints about the course.

I set out determined to take this (relatively) easily and quickly put aside the fact that one of my former Thunder Run team mates is currently ahead of me. I know he can’t maintain that pace and true enough I soon ease past him without doing anything.

What is more worrying is that another (occasional) rival of mine, shoots past me about six miles in as if his shoes are on fire. That has NEVER happened before. I hope he can’t maintain that pace but just in case he can, I up mine a little. This is probably my undoing.

I am correct in that he can’t maintain that pace and soon I get back in front of him, leaving him far behind until... disaster strikes. At ten miles my calf locks up and I start to walk, race over. Both of my ‘rivals’ come past me. Oh, the shame but I suppose I was in good company today.

Later, Usain Bolt pulled up injured in his last ever race while Mo Farah also messed up his finale. Mo is now apparently giving up the track to focus on racing against me full time on the road. Not sure I’ll give him much trouble.

I have my phone with me, specifically for an injury meltdown just like this, so I text L that I’ll be a while and to put her feet up/have a beer/get her knitting out etc etc.

She is somewhat appalled that I’m not. I sort of run/walk/jog/shuffle the last three miles and finish in 1:58. Not bad I suppose and at least I finished unlike Usain but it’s not a good omen for my future plans.

The goodie bag proved to be interesting, red t-shirt aside, with a few decent snacks, a medal and some weird plastic thing that I mistook for a dog toy but someone else said was perhaps a massage tool but could just as well have been a sex aid. There were no takers in our household to research this further, even the dogs weren’t interested.

We spend the evening in the Crafty Crow.