We are away for the second weekend in a row and once again heading northwards by train, this time via Sheffield just in case L fancies popping for a parkrun again like last year (but she declines). This time we are not passing through Newcastle but disembarking there. It’s Great North Run weekend.

Back at home Daughter is dog sitting, so the boys aren’t going to get fattened up by the kennels this time.

We stay at the oddly name Sleeperz hotel, which is nicely central and only a few doors down from a decent micro pub, the Split Chimp. Where we meet other Great North runners hydrating on the beer. We meet two people from Nottingham, one a runner sporting the same Robin Hood Half t-shirt as me, the other a non-runner who’d moved to the area. 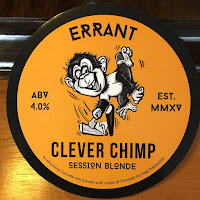 Sleeperzzzzz do us a decent pasta buffet for Saturday night which is very welcome but sadly they don’t provide a working air-con which just dumps water all over our floor. They don’t seem too apologetic when I report it to them when we check out.

We do make it to the official race village and pasta party this year but aren’t terribly impressed with either although I do pick up a Great North hoodie to replace my rather lived in Vitruvian one.

On race day we are again central enough to walk to the start where I bag my usual space near the front and then say farewell to L who has to trudge several miles back to find her start. We agree to meet in the beer tent afterwards. 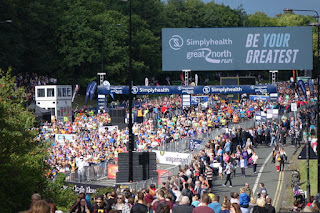 The race goes well, if you class 13.1 miles uphill as well. It’s not supposed to be all uphill but it certainly feels like it. The beer stop at 10 miles is so welcome I gab two cups full.

Then I queue for a massage, for longer than I would have liked because there’s now a big queue at the beer tent. I buy three pints. One each for L and I, and another for me while I wait.

L arrives looking not quite as enthused as she did after the Faroes Half. Then we discuss tactics on how to get back to Newcastle while avoiding the usual two hour Metro and/or ferry queue.

There are direct buses from the finish to Newcastle, called the R1, and we give that a go. There are plenty of buses and we take advantage of the chaotic queuing system. Each bus seems to have it’s own queue but everyone by default is joining the queue for the first bus. So we get on bus two, sorted.

The bus is quicker but it isn’t that pleasant. The weather is warm, the bus is badly ventilated and it has to take a roundabout route due to the road clothes. One chap looks ready to vomit while I’m considered fainting in solidarity with him. We both make it through in the end although that experience makes the run seem a doddle.

We have a second night in Newcastle and again we end up in the Please To Meet You for their Sunday Lunch with a few beers of course.