Today it’s my birthday, yes another one. 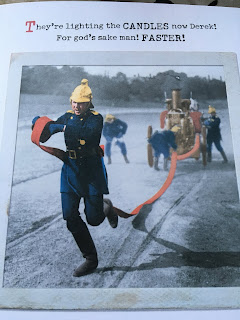 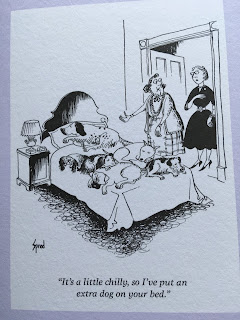 During the brief spell when I thought I’d recovered from my post-Manchester injury worries, I foolishly asked for a race entry as a present from L. So Windermere Marathon here I come, on one leg, in just three weeks’ time.

Therefore my tight calves and I sit out parkrun as L and Daughter do Bestwood, saving the pain for tomorrow’s Longhorn.

Derby move into the final play off place by defeating nearest rivals Bristol City 2-0 in Bristol. They now just need to hold onto it through the final two games.

In the evening we go to Broadway.

Red Joan is a wartime spy drama directed by Trevor Nunn based on, but in the end baring little relation to, the story of Melita Norwood who was unmasked as a former Soviet spy in 1999.

Joan Stanley (Judi Dench) is living in quiet retirement in English suburbia and tending her garden when the police roll up to accuse her of treason. Her friends, neighbours and even her own son Nick (Ben Miles), a successful lawyer, have absolutely no idea about her dubious past. Nick thought she’d been a librarian. 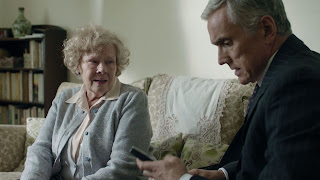 Dench plays her role admirably, as ever, but her Joan doesn't feature hugely and it is the younger version of Joan (Sophie Cookson) whose job it is to flesh out the story. This is done via flashbacks, as the older Joan digs reluctantly into her memory banks while under police interrogation.

Joan was an impressionable undergraduate at Cambridge University in the late 1930s when her conversion to the Communist cause began when an intruder appears at the window of her student flat one evening. This is Sonya (Tereza Srbova), a young lass of eastern European background who has a bus load of dodgy communist friends in tow, for whom Stalin’s reign of terror never happened. 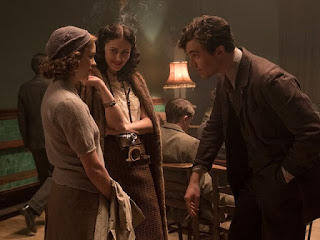 Among these is Leo (Tom Hughes) to whom Joan is immediately attracted. He likes her too, in the sense that she’s malleable both to his point of view and to his designs on her body. Predictably Leo turns out to be a shifty, cold lover and it never really dawns on Joan that he’ll never love her as much as he loves Stalin. 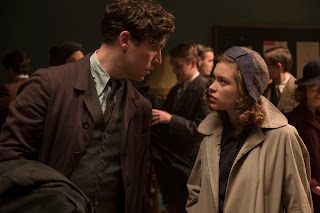 After leaving University, Joan gets a job on a top secret research project developing the atom bomb. Initially she is just a secretary but her expertise in physics means her input and influence gradually increases aided by her creepy (and married) boss Max (Stephen Campbell Moore) who has the hots for her.

Sadly the film, while well-made, lacks any real excitement or tension. Even a potentially exciting trip across the ocean to Canada under heavy military escort is underplayed but at least offers the chance for her to accede to an affair with Max, although it would appear a largely passionless one. 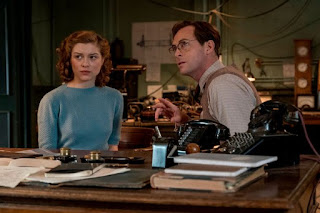 The advantage of being a mere girl in 1930s\40s means that no believes she could even be involved on the atom bomb project let alone slipping nuclear secrets to the Soviets on the sly. So Max gets the blame when they suspect someone is in bed with the enemy. While Joan justifications for her behaviour ring very hollow and it is not at all clear that she believes in them herself. 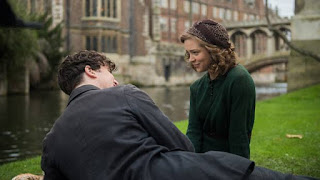 Overall it is an ok film but it felt like a huge missed opportunity. It’s another of those films where the post-film googling is better than the film itself.
Posted by FitForNothing at Saturday, April 27, 2019