The legs can’t be too bad after Sunday’s five and a bit laps of Bedford Autodrome as I manage a dog jog on Monday with L and Daughter. Given a brief run of freedom off the lead, the Lad tries to scale the six foot high wall out of the park in pursuit of a squirrel. It was nearly a disastrous moment with the main road the other side of it but thankfully he fails to defy gravity.

He is becoming, rather worryingly, quite an escape artist. On Tuesday morning he escapes through the fence on the park, has a quick swim in the lake there before reappearing.

In the evening, I'm at Rock City to see The Zutons.

I miss the first band Queenzee but do catch The Fernweh. They are a sort of folk come 60s\70s psychedelic rock band. It seems more of a jam session than a concert amid which you get the feeling that the guitarist is dying to burst into a rendition of 'Purple Haze' but daren’t. They are curiously pleasant but they don’t really hold the crowd’s attention. 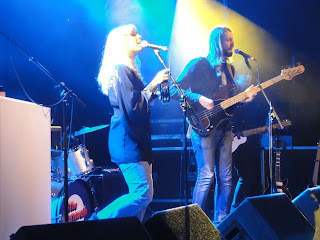 How do you cause an argument on the Zutons comeback tour where they are playing their debut album ‘Who Killed...... The Zutons?’ in full. This was the album which was nominated for the Mercury Prize in 2004 but lost out to Franz Ferdinand. You do so by telling the fan next to you that you think their second album ‘Tired of Hanging Around’ was nuch better. Oops.

Tonight, eleven years after their third and final album and, aside from a one-off tribute gig in 2016, nine years since playing live I am ticking another band off my ‘must see’ list.

The band take the stage and open with ‘Zuton Fever’ off ‘Who Killed...... The Zutons?’, of course.

Personally I’m not a great fan of ‘album in full’ shows so they get great kudos for (a) omitting a track - oddly ‘Nightmare Part II’ (b) not playing it in order and (c) inserting throughout tracks from that superior (ha ha) second album. So, yes, it's a great show. 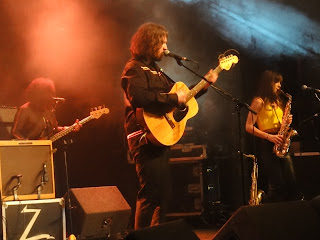 Despite being a six-piece, your attention is clearly drawn to the three with the big hair at the front of the stage. After an exhausting opening four tracks ending with a delightful ‘Valerie’ both lead singer Dave McCabe and saxophonist Abi Harding take time out to adjust their hair. Dave half-heartedly tries and fails to keep his out of his eyes, Abi simply takes an age putting hers up. Guitarist Boyan Chowdhury just doesn’t care. 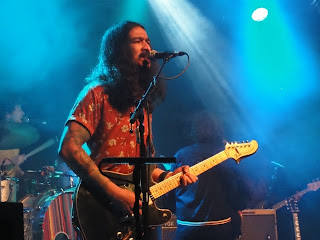 While it’s McCabe who does the audience interaction in his thick Scouse drawl, it is Harding who does the dancing. Is now the time to mention her leather trousers which that could be classed as a sexist remark but then had any of the guys been wearing the like I’d certainly have mentioned it too. Also, how can she dance in those heels? And no, none of the guys are wearing heels or even making a half decent fist of dancing. 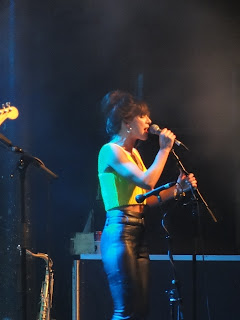 While the album tracks are well received it is the singles that standout. The more fast paced ones like ‘Pressure Point’ and ‘Don’t Ever Think (Too Much)’ ramp up the crowd but it is perhaps the more nuanced ‘Remember Me’ and ‘Confusion’ that steal the show. 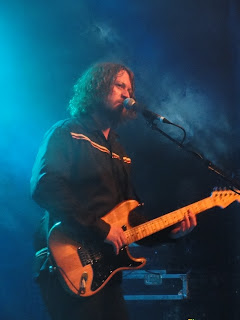 The set finishes with a rather sweet communal rendition of ‘Moons and Horror Shows’ at the front of the stage before the band return for an encore of ‘Hello Conscience’ and then close of course, with the stop-start melodies of ‘You Will You Won't’.
Posted by FitForNothing at Tuesday, April 02, 2019