Today we, because L joins us for this momentous occasion, go up to a small local dog agility show at Bilsthorpe where the Lad will make his competitive debut.

He gets just one run, right at the start of the day and in the rain. It is a simple course of just jumps and tunnels which he will be able to do, just not necessarily in the right order. The main reason I have chosen this venue for his first event is the completely fenced in rings which should stop him absconding which is my main worry if he sees something more exciting in the next ring. Although it has been known for some dogs to jump the whole caboodle. So who knows what will happen.

He does have a good look around when I attempt to get him to sit on the start line but his focus is all on me and on his course. He gets eliminated but he doesn’t care and nor do I. It's mission accomplished as he didn't abscond and it was in fact quite a promising debut. Now for the more daunting prospect of the six runs in three days I have entered him for at my own club’s show at the end of the month where the rings are not fenced.

I should also mention that MD is here too and he has three runs. He is clear in one of them but not placed.

As I am running the Chesterfield 10 tomorrow, the evening is an AF one but we have a new treat having discovered alcohol free Leffe Blonde and it ain't bad at all. 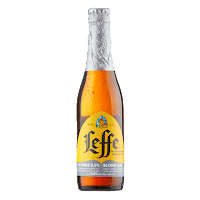