While we were in Portsmouth, Daughter and her +1 dog sat for us. To compensate for putting up with the boys, L made them a cottage pie and I made them a lasagne which got rave reviews. I'm sure L's cottage pie was divine too.

I return from Portsmouth with a bad throat which I blame on the hotel room being too warm and which I seem now to have passed on to L. She’ll probably give it me back in due course. Although in the meantime I take it to a meeting with me and give it four chaps to take back down to Taunton with them.

The Lad adds to L's woes by catching her fingers with his rather sharp teeth. Talking of the little brute, it's fascinating to watch him on Dog TV. Today he’s snuck a ball into his bed (you never know when you might need a ball) but now he can't lie in his bed because of it. He does eventually move it. No disrespect to MD but I’m not sure he’d have thought of that.

By Friday L must be much better. She says she can taste her tea, that’s always the acid test, and we both make it to the gym. Yes even me.

Then in the evening we’re at Derby Book Festival. We go see a talk by Nicci French which intrigues me because Nicci French is\are two people. I loved their ‘Beneath The Skin’ but then their Frieda Klein eight book marathon defeated us both and we didn’t get to the end. Although I got further than L.

Before that we see Kamal Ahmed who gives a fascinating insight into his life. Ahmed is a journalist who worked for both The Observer and The Sunday Telegraph but is now Editorial Director of BBC News. His mother was from Rotherham and his father from Sudan. He tells us what it was like growing up a mixed-race Brit in Ealing in the 70s and 80s.

While we’re there we go do a touristy bit by seeing the Knife Angel that is on display in the city centre. 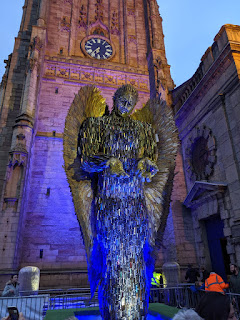