Eat Out To Help Out

It’s time to follow the Government’s advice of losing weight and eating out to help out at the same time.

So on Monday I do a 10k run with the Lad, accompanied by MD for about the last km. Then on Tuesday we head over to meet Son in Leamington for a Rishi special. Where he informs us that his Wedding and Honeymoon have unsurprisingly been delayed again. Now scheduled for March 2021. 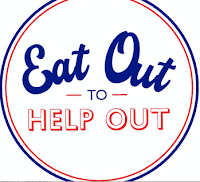 The powers that be will also be pleased to know I played tennis on Tuesday and nearly won a set. The second set finished 6-6 but my opponent was too knackered to play a tie break. So I imagine that will go down on his spreadsheet as a drawn set and not that he effectively conceded the whole match.

The one way system and queuing have now all gone at Asda but they have finally put plastic screens between all the self-checkouts, it’s only taken them five months. Also on the plus side mask wearing seems to have belatedly taken off although for some people this simply means that they see no need for social distancing at all.

We decide to order new parts for our garden bench. The only problem is that delivery could take up to twelve weeks as they’ve been snowed under with requests from everyone doing the same thing during Lockdown. This will at least give us more time to dismantle all the old rusty bolts off it.

The London Marathon finally admit that October’s race will be for elites only, who will have to run eighteen laps of a 1.5 miles course in St James’s Park. Nice. The mass event is cancelled and won’t run in April 2021 either. Next year’s race will be in October.