In a bid to keep me ‘relevant’ work send me details of online courses to update my skills.

Our Banksy has disappeared, in fact the whole wall it was painted on has disappeared. The building that it was on the side of has sold the whole thing to the highest bigger. Clearly it couldn’t have stayed where it was because it was under constant threat of vandalism but it would have been nice if it had stayed in Nottingham and perhaps have ended up in Nottingham Contemporary or somewhere.

Instead we do have some other new artwork. The underpass at the roundabout near us has a new mural praising and thanking the NHS, our QMC hospital is nearby. I run past it just as they are painting it but at the time I didn’t know what they were doing and was unsure as to whether to reports the vandals or not. 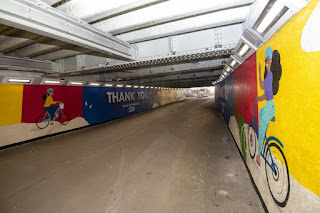 That run, came after a traumatic ball session with the dogs on the park where I twisted my ankle but then thought I’d recovered enough to run a wheezing and hobbling 4k while stopping frequently to stretch my bad knee. Just another 38.2k to go to make it back up to marathon distance.

Posted by FitForNothing at Friday, February 19, 2021