The Trial of The Chicago Seven

This year it is going to be even more difficult to watch the award nominees than usual even though the Oscars have been delayed until the end of April and you would have thought more of the films would be available on streaming.

So far I have only managed to track down one nominee, Aaron Sorkin’s The Trial of The Chicago Seven, which was offered free on YouTube by Netflix for a limited period so that they were eligible to be nominated.

This courtroom drama covers the seven who were arrested for allegedly organising violence at the anti-Vietnam War protests at 1968 Democratic National Convention where Vietnam apologist Hubert Humphrey was set to be named the Democrats' candidate for President. These were disparate group of characters, who mostly didn’t know each other, who were charged with conspiracy and incitement to riot.

It was widely accepted at the time that the Chicago police had initiated the violence, a view backed up by attorney general, Ramsay Clark. However when Clark was replaced by John Mitchell, Mitchell set out to prove otherwise. 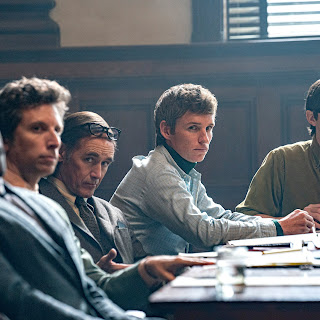 All the accused claimed to be peaceful protesters. These included students Tom Hayden (Eddie Redmayne) and Rennie Davis (Alex Sharp) along with David Dellinger (John Carroll Lynch), who was a member of a pacifist society.

On the other hand, Abbie Hoffman (Sacha Baron Cohen) and Jerry Rubin (Jeremy Strong) were well up for a bit of violence although still protested their innocence. While the two others occused, Lee Weiner (Noah Robbins) and John Froines (Danny Flaherty), seemed to have absolutely no idea why they were there. 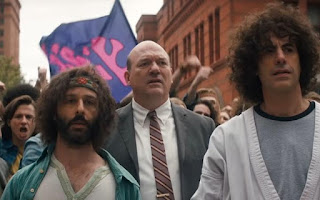 There was also an eighth man on trial, Bobby Seale (Yahya Abdul-Mateen II) of the notorious Black Panther party. Seale was denied the right to proper representation and his case was eventually declared a mistrial but not before he was, among other things, shackled and gagged, at the behest of the judge. 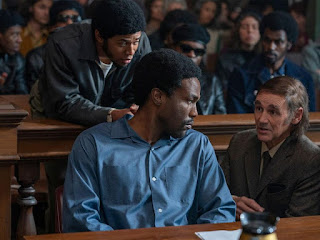 In court, lawyer William Kunstler (Mark Rylance) fought for the men, struggling both in court and behind the scenes to hold them together as a united front in a trial that lasted five and a half months. 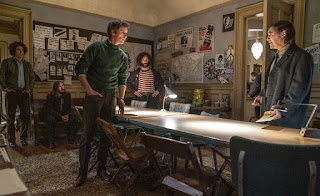 The film, of such a politically motivated trial, feels timely with both America and the UK currently struggling with culture wars and the question of just what actually constitutes freedom of speech these days.

Five of the men were eventually found guilty of inciting a riot and all seven, plus their lawyer and Seale, were sentenced to prison on multiple counts of contempt of court. All charges were reversed on appeal.

It’s an interesting and informative film but not one I’d like to see trouble the Oscars too much.

Posted by FitForNothing at Saturday, February 20, 2021