We have three bands this evening and a late finish (a rarity for Rock City) so I get to see all three with local mini-legends Eyre Llew opening proceedings at a relaxed 7.45pm. This Nottingham trio have been around for seven years but this is the first time (I think) that I have crossed paths with them, in what is their first gig since lockdown. They are also the first band I know to have chosen to sign a song in Korean. Allegedly that is, as I couldn't prove whether it was Korean or not and they are one of those bands where you struggle to make out the words anyway. As lead singer and guitarist Sam Heaton says, try writing a song in a language that isn’t your own. Not easy I'm sure but clearly he's up for a challenge. 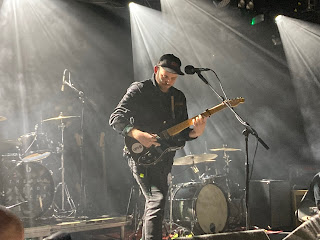 They're ambient style is very niche which is no bad thing but it's also not really my thing. Something which can't be said for Sheffield's Sheafs.

The first thing I think is that they're impersonating the Sisters of Mercy. On track one anyway, not so much after that as front man Lawrence Feenstra apologises for the husky gothic vocals because his voice is going.

After that his voice does seem to improve and it becomes clear that they have many styles to their bow. However the pounding drums, throbbing bass and chunky guitars remain. It's so 'Indie' cliche but also so good. Then I do love a band that grabs their audience by the throat from the off. I think you can tell I’m impressed. It's not just the tunes though, there’s a good line in banter and stage presence too. 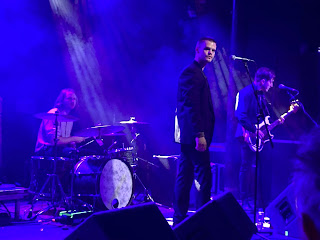 The other thing is that they're not all from Sheffield either and two of them are from Nottingham. Do you need any more reasons to check them out? They're well good.

So to a band with a fairly similar style, if a little more polished after years of gigging. Manchester’s The Slow Readers Club originally intended this tour to be for their 4th album ‘The Joy Of The Return’ but of course it didn't happen. Instead they released a 5th album in lockdown ’91 Days in Isolation’ and now have a single ‘Tell No Lies’ out from what will be their 6th when they get around to releasing it. 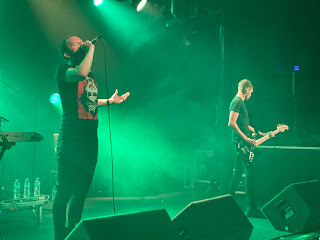 ‘The Joy Of The Return’ is a very appropriate phrase given the current situation where bands are clearing loving the joy of returning to the stage and being back in front of a live crowd again. Aaron Starkie and his band, always effervescent, are no exception. 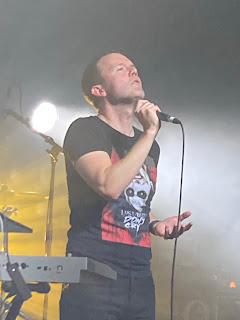 Both new records are thoroughly plundered tonight along with many of back catalogue favourites and as always they delight in mixing the set up and not always playing the obvious. 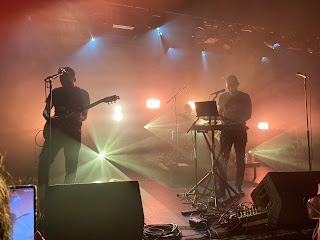 The finale was fairly obvious though... but when it’s as good as ‘Block Out the Sun’, ‘Feet on Fire’, ‘I Saw a Ghost’, ‘On The TV’ and ‘Lunatic’ with a little break for the new single, who’s complaining? Exceptional as ever.
Posted by FitForNothing at Sunday, October 03, 2021