We have some serious rain at the start of the week and some serious flooding by the Wollaton pub, all the way across the road, which would have made cycling interesting. Thankfully it has dissipated by the time I do cycle on Thursday.

L gets messaged by a friend who has five collie puppies not spoken for and asks if we’re interested. Of course L’s interested but sanity says otherwise and they’re also eye wateringly expensive. Surely this pandemic puppy boom is over now and prices should come crashing down.

Tuesday is dog training and on Wednesday I’m out in Derby. My friend isn’t terribly impressed that I’ve picked Mexican food at the Derby Tap as our food option after a few beers in the Alexandra. It’s not that great to be honest but there aren’t that many better options.

Nottingham City Council cancel Bonfire night due to Covid. I assume they’re still feeling the backlash from last year’s Christmas market. Wonder if this year’s will go ahead? L says she just assumed it was because the council were just broke and incompetent. Well they are both of those things too.

Saturday is Parkrun at Wollaton and then L goes over to visit her Dad in hospital while the boys and I cut the lawn at my parents’ house.

On Sunday the alarm goes off at 4am. Which delights the Lad because he thinks he’s getting his breakfast extra so early and he’s not wrong but they are then both dumped as we drive to Manchester for the Manchester Half having conserved enough petrol for the trip. Where we struggle (again) to find our way around the road closures to the parking at Manchester United.

We are so early because my start time is 8:10 after the Half Marathon is shunted forwards to make room for the Marathon which had been cuckoo-ed in after being delayed from April. I was, of course, supposed to be in that but I wimped out of.

There are allegedly no spectators allowed at the start or finish but all this amounts to is L not being allowed in the Race Village but I don’t think she was last time either.

The official advice is to meet your loved ones in a nearby cafe. Which will all be indoors and packed... so not particularly Covid safe and clearly they are also not particularly familiar with the area because despite having a major football ground and a major cricket ground there is nowhere desirable to go anyway.

At the Race Village the staggered starts due to Covid and the traffic issues mean everyone is all over the place with their start times. Once I start I soon pass the 3:00 hour pacer, although I’m not sure why they were so far forward or perhaps I started further back than I thought. Then I pass the 2:30 pacer, then the 2:15. I figure sticking with 2:15 would get me sub 2:08, which was what I did in Newcastle, as I must have started ages after them?

I’m running at an ok pace but then I almost pass out at about 4.5 miles. Feeling faint I stagger to the side of the road before I unceremoniously hit the ground and a marshal finds me clinging to someone’s garden railings. That’s never happened before.

The marshal tells me to have a gel as my sugar must be low then when I tell them I’d just had one she reverse ferrets and say the sugar rush is what’s probably making me feel faint. Ok! I sit down for a while and she gets bored, so she wanders off while keeping an eye on me in case I attempt something reckless like running again.

I tell her I’m going to walk a bit but then when the 2:15 pace passes me again it’s clearly time to start running again.

I spend the rest of the race tipping water over my head to prevent another faint, it is quite warm, and being highly undecided on whether to risk another gel or not. I finish in 2:08 again, which blows my theory about the 2:15 pace who I beat easily, but not bad considering the mid-race lie down. 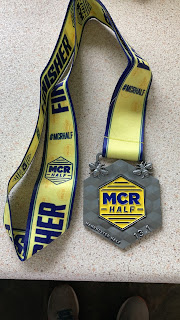 We visit the under new ownership Royal Children pub in the evening, it’s very pleasant but very quiet and we have the place to ourselves for most of the night.

Posted by FitForNothing at Sunday, October 10, 2021