The two and half year long build up to my Brighton Marathon misadventure finally reaches its conclusion as we head down by train to Brighton after first dropping the dogs off in kennels. 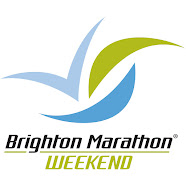 The event that was to have seen three of us celebrate L’s sisters 50th birthday now has just one mug standing. Moi. The one with only one leg. Although L is doing the 10k. Of which I am kind of jealous.

Despite supporting our chosen hotel by keeping our booking in September 2020 after the second of three covid induced cancellations we have now be bumped out of that hotel and have had to book a different one. This one is called the New Madeira Seafront Hotel and as its name suggests it on the seafront and right by Madeira Drive where the Marathon finishes. Perfect planning you would say? Apart from the fact that it is practically a top a cliff face and the rooms appear to be above a night club but this second issue turns out to be fine. The first could be a problem tomorrow.

Having checked in we head down the cliff face to the race Expo where we both have to register and pick up our numbers. Dragging everyone down to Brighton a day early to do this seems to me rather cruel. It is also really busy and the queues for collection are ridiculous even at supposed quiet times.

Luckily the wait for the 10k wasn’t too bad and as I’d entered the Marathon on my Amex card I got a separate shorter ‘priority’ queue. Which turns out to be a good call. If it wasn’t for that I would have joined everyone else standing in a queue for ages which isn’t exactly what you need just before a marathon.

Another issue with handing numbers out the day before rather than posting them out meant that we didn't get our names on our numbers which is pretty a useful thing to have for a marathon where crowd support is so vital.

Having got our numbers the next issue was that despite knowing in advance what size t-shirts we wanted, they didn’t have enough in our sizes. Apparently small ran out on Friday, medium on Saturday morning.

Then we had to drop our bags a day early because apparently logistics meant they couldn't have a bag drop at the start this year. It's a shame that there were all these issues the day before because race day itself turns out to be really impressive.

Before that we had our pre-booked table booked at Il Bistro where we had a nice meal and a few cheeky beers, then it was time to rest up before the big event.

We walked up from the hotel to the start in Preston Park dodging the cyclists that were on the course doing the Brighton Ride event. With the 10k starting at 9am, over an hour before my start for the Marathon I had lots of time to kill once there. It was actually one of the most chilled starts to a race I've ever had. I got chance to watch L start and then made use of the facilities provided by American Express – coffee, cakes, gels, water etc and our own way of filtering into the start. Once again it was well worth paying by Amex.

Eventually my wave came around and we were on our way. We did a lap of the road around the outside of the park and then headed down through the town towards the sea front. There were spectators everywhere lining the route and then there just before I hit the coast at around the 5 mile point was a beaming L, clearly buzzing after running a great 10k.

After a quick hug and a kiss I headed up the coast the three miles or so to Rottingdean but not quite as far as the Lido at Saltdean. Then we turn back towards Brighton where the pier more or less marks the halfway point. Once upon a time my target Marathon pace was nine minute miles, here I start at something closer to ten minute miles but hold this pretty consistently through halfway recording 2:08 for the half marathon which I was reasonably happy with. Obviously that’s not going to produce the coveted four hour marathon but if I could keep it going it would just about bring me in under 4:30. 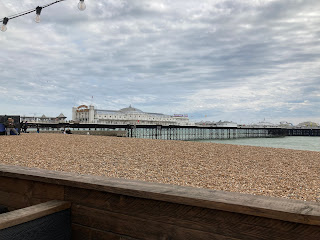 I have to say that the first half of the race had been great and I’d almost enjoyed it. The route was varied, interesting and with some great views. It was a little hilly in places but not excessively so. The second half however... was a bit grim. It seems they were a bit devoid of quality ideas on how to add miles for the second half.


From Brighton we head into Hove and a tour of the residential streets which involved the very straight, very long and very boring Church Road. Once you’re at the bottom of Church Road you have to U-turn and do it all over again in the opposite direction. It’s a four mile stretch that feels like double that distance. The words ‘repetitive slog’ doesn’t do it justice. I will never forget Church Road. By now my pace was pushing out towards eleven minute miles but that was ok, I had a bit in hand for a 4:30.

Church Road actually makes the next bit, the industrial estate section including the infamous lap of the Power Station at mile 21, seem almost seem sane. I guess the real problem here is the lack of crowd support here which was a shame because crowd support around most of the course was brilliant. You could literally have curled up in a corner somewhere and probably no one would have noticed. This was actually very tempting.

The thing that does break up the monotony is the amazingly abundant feed stations. They’d been impressive all along but were every mile for around the last 10 miles. They were all well stocked with not only water but energy drinks, gels, sweets and Oranges. The only thing missing was the beer. I could have done with a strong one because by now I was now tumbling towards and then into twelve minute miles, so 4:30 was long gone.

Apparently several people were tracking me online but by now, because I was barely moving, they’d probably decided that the tracker was playing up, like it had at the Great South leaving me stuck out on the course for weeks later. They’ve probably all put the football on instead.

Then at long last we were on the promenade for the last two miles or so. Two very long miles. L popped up again, as she had done throughout, and I cling to her like a life raft before realising that I do actually have to complete this damn thing. So off I go again, staggering down Madeira Drive to a finish line that barely seemed to be getting any closer.

I finish in 4:41:58. They hand me a medal and my kit bag before pointing me in the general direction of the meeting points e.g. somewhere to collapse. There were bodies everywhere so it wasn’t easy to find my own personal collapse zone. Eventually I see someone vacating a patch of ground and claimed it for myself with not a lot of elegance. An alarmed helper quickly appears from nowhere with a chair and possibly an oxygen tank. The chair was a very nice gesture but I wasn’t really sure how he expected me to get into it. Thankfully he had a solution to that and strong muscles as he hauled me into it.

Eventually L finds me which also means that I have to extract myself out of the chair and somehow make my way up the cliff face to the hotel. I made it halfway up the steps before my legs cramped up but there wasn’t really any stopping now that I was halfway up. 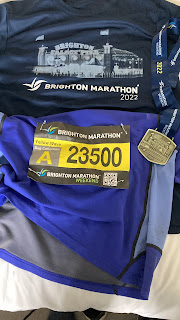 In the evening we have a few beers, obviously, before revisiting the same curry house that we tried out in 2020. We stay for an extra day and I manage to persuade my legs to walk a bit as we walk back down to Hove to the nice bits e.g. not Church Street and not the Power Station. On the second evening we had a nice meal in an Argentinian Steakhouse called Chamuyo before getting the train back on Tuesday.


Would I do it again? Hmmmm.