L’s boss comes back from his holiday raving about a book called Red Notice by Bill Browder. 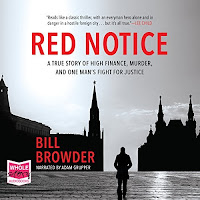 It’s a topical one but you have to be careful who you discuss it with and remember to wrap it in a brown paper bag if you’ve reading it on the bus. Many people associated with that story have since been found murdered.

Two people who were involved in making a play about it died earlier this year. According to google six other people associated with the book have also since died and there was one chap who ‘fell’ from a building but survived. The author of the book, an American, is still with us at the moment.

On Thursday, we find that none of the outdoor courts at the Tennis Centre are available due to the National Junior Tournament they are hosting, so we decide to splash out and play inside for a ‘treat’.

L meanwhile is doing a ten mile run with Daughter. I meet them in the Doctors Orders afterwards, where they are drying out after it rained on them. Good job we played inside.

Friday, I’m on the bike but it’s bloody windy. The new tennis professional in the family is supposed to have a coaching at 6pm but that's cancelled due to the wind.

We’ll just have to stick to the usual Friday night plan then.