We get home from holiday to the overpowering smell of our drains. Well I do, L has no sense of smell and can’t smell anything. It looks like someone has had theirs cleaned out because our garden is full of sewage. Ugh.

We quickly arrange for the same guy who came out last time to take a look. In between looking at our drains he bonds well with the Lad, who loved him but still managed to pull all the washing off the line in between jumps of joy. He has a Kennel Cough jab tonight, up the nose, which might calm him down a bit.

The chap again says it's all detergent that's causing the blockage but doesn't see how it can all be us. He wanted to pop next door to put a camera down their drain as well but it seems they've built their conservatory over it. Helpful!

He advises us to contact Severn Trent, as it’s really their problem, and get them to have a look but unless they knock down next door’s conservatory I can’t see what good it will do.

All the same I will draft a letter to Severn Trent, right after I’ve sent one to the council about our recycling bin. They refused to empty it this week and slapped a label on top listing what shouldn’t be in it. None of which is in it. 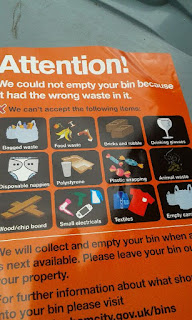 In the end I decide to ring the council but the guy on the phone doesn’t know why it was rejected either because the bin men don’t log why bins are rejected. How efficient! So we play recycling bingo as he lists possible things that might have upset them. Having gone through everything he thinks it was probably the shredded paper, which I thought was allowed, apparently not. Who knew? All because we didn’t bury it under two weeks' worth of rubbish like we usually do.

I need a pint after all that, so it’s a good job I’m out in Derby on Wednesday. Which shamefully means I don’t support Cycle To Work Day.