L has (bizarrely) decided she wants to take up tennis and has asked whether my opponent’s partner fancies a knock about. She declines, clearly running scared because L has been to Wimbledon although only for the Pimms. Daughter steps up to the plate and plays instead, although rather unenthusiastically.

I manage to get a bike ride in on Friday as sort of preparation for Saturday’s Erewash Half. 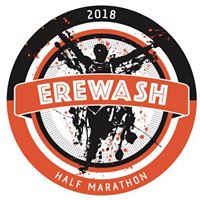 The Erewash Half Marathon is a point-to-point race in the same style as the long running Birmingham Black Country Half Marathon.

In this case you are bussed out to the start at Langley Mill and then we are tasked with running back along the canal towpath all the way to West Park Leisure Centre in Long Eaton. The race uses a time trial format, setting everyone off in small groups with the fastest going first to limit congestion.

Not that the bus leaves at 7.20. They are supposed to have two buses but only one of them turns up, then we come across the other bus with its hazards on close to J26 of the M1. The buses do look like antiques.

Eventually I start and it’s a pleasant enough run if you discount the fact that the route along the canal is actually only about 10 miles and not 13.1. So after about 8 miles we depart the canal, do an extra loop around some footpaths and then make up the rest of the distance doing a big loop of West Park before the finish. Why not just make it a 10 miler...

The other problem is of my own making, namely my lack of fitness. This is my first half marathon since my ill fated attempt at the Sheffield Half in April and I struggle, boy do I struggle. I walk loads and finish in an eye watering 1:57.

They hand me a shot glass at the finish, which sadly turns out to be full of sweets, and a t-shirt with the logo printed on the back, oh dear.

Knowing that, due to the staggered start time, L will be a while I crawl into the car and head home to fetch the dogs. Then I craftily find a gullible 10 year old to chuck their balls for them while I get back to rolling on the floor in agony and wait for L.

L comes in moaning about her fitness almost as much as me...