The Beauty Of Marathon Training

Saturday is parkrun and after being 4th last week at Shipley, The Lad and I are 84th at much more popular Markeaton Park this week with a remarkably similar time, which is very sobering.

Derby start a late tilt at the Play-Offs by demolishing Rotherham 6-1. After which I pick up L and Daughter from the hospital. 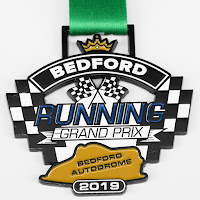 Sunday brings my final warm up race before Manchester next week. Of course, the beauty of training for a spring marathon is that you get to run some fantastically dull events as there is really little else at this time of year. Hot on the heels of the Half Marathon at Prestwold Hall which was organised by RunThrough Events comes the Bedford Autodrome 5k\10k\Half Marathon\ 16 mile\20 mile\Marathon (delete as applicable) also organised by RunThrough. This is basically Prestwold again but with the least dull bits removed.

Whereas Prestwold was only mostly on a car racing circuit Bedford is entirely on one although this is one designed by none other than Jonathan Palmer. Which would be great but seriously Jonathon... I’m not impressed.

The 5k is one lap of the circuit, the 10k is two laps, the Half Marathon is four laps... you get the gist. Pity the poor souls in the marathon, eight laps! That’s not me this week, I have opted for the 16 Mile option which is five laps plus a mini lap to make sure the distance is right.

Not that I’m sure it is right as I run 6:07 for the first mile which is insanely unlikely. Then again it is perhaps just another case of random mile marking and I’ll give them the benefit of the doubt about the overall distance.

The race itself is fine, once you’ve switched yourself off and got down to grounding out the laps. The tarmac is lovely and it’s all quite flat being on a motor racing track although there was a slight slope on one section of it. It was left to the strong wind to make it ‘interesting’, being behind you, then being a crosswind, then being in your face etc etc. Repeat for each lap.

They started the races in reverse order of length, so the marathon first, ending up with all the races on the track at the same time. So you never really knew who you were racing against but that was fine. No one cared who they were racing against, we were all here training for something else.

L ran the 10k and I did wonder if we’d get to run over the line together but it didn’t happen like that.

I think my time of 02:21:08 wasn’t great but having only Naseby to compare it, where I was three minutes quicker, it’s hard to tell and of course the Notts 20 did not give us any mile markers at all. I was also slow through 13 miles today but it’s all about getting some distance in a week out from the big one.

In the evening we do a mini pub tour, taking in the Hockley Rebel and then the Six Barrel Drafthouse, which is the first time we’ve drank there. Then we got to Taste Thai, which was once Thailand Number 1, for a meal.