Saturday sees up heading up to Newcastle for the Great North Run. We go by train and via Sheffield, just in case someone obsessed wants to take in a Parkrun but, on this occasion, we don’t.

We have moved from last year’s hotel after they ratcheted the price up. We stay in Motel One which is right near our usual post-race Sunday Roast venue the Pleased To Meet You.

Motel One is nice, offers free bottled water to ‘members’ (I only joined to book it this once) and an electronic aquarium on the TV, like some sort of 90’s screen saver. 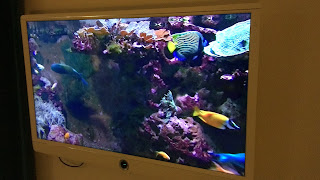 Having checked in we head off to find the Pasta Party, having finally got the hang of the fact that this is now in Gateshead or rather it was. It isn’t this year apparently. The Great North City Games which are the mainly track based athletics events they usually have the day before the Great North Run have been moved to Stockton. Oh. Although we didn’t initially realise this when we got to Gateshead because they still have the big screen showing live coverage of it. While the Junior races are still there but the Pasta Party and the Expo seemed to have been vaporised. Unless that motley collection of tents is the Expo. They certainly don’t have any hoodies this year. This doesn’t bode well as the race approaches its 40th birthday next year.

In the evening, finding somewhere to eat is difficult, for some reason everywhere is busy. In the end we eat at the Banyan bar which is full inside but they let us eat outside. That is until another staff member turns up to tell us that we can’t eat outside... once we’re finished eating. Then we pop into the delightfully and prophetically named D.E.A.D. for a pre-race beer. D.E.A.D. stands for Drop Everything And Drink.

Sunday is the race itself and we follow the throngs to the start where we join first the loo queue and then the start queue. Some poor folk probably won’t have even have cross the start line by the time Mr Farah is taking the tape at the finish. I line up next to a chap who ran 1:27 last year and is hoping to improve on that this time. One of us is in the wrong start zone.

As I have mentioned in previous years, it’s a pretty dull course so I mix things up this year by staying on the right hand side of the start which means you go over the first flyover rather than under it. So daring.

Then it’s the one exciting bit, over the Tyne Bridge but for some reason my timing is out and the Red Arrows are not overhead this year. Then I settle in for the grimness, get in a steady pace and high five as much of the crowd as possible to relieve the boredom until the next highlight at 10.5 miles where the beer stop is.

I am aiming for a time of around 1:45 but have completely failed to locate the 1:45 pacer either at the start or since. Then he comes past me at 12 miles. Are pacers supposed to sprint finish? I get a shift one and ‘un-lap’ myself finishing in 1:45:50.

Overall I am pleased with that. It’s a PB at my third attempt here. In previous years I’ve arrived pre-injured and have done a 1:48 and a 1:51.

Then it’s time for some more queuing. First I spend almost as long in the massage queue as I did running the race, all for what wasn’t even a great massage. Then I join the beer queue only to find that L has now finished her race and made the beer tent before me despite starting ages after me. We split three pints between us before heading off to join the bus queue as we attempt to escape South Shields.

Our evening meal and post-race drinks is again in the Pleased To Meet You and for breakfast the next morning we again frequent the Cathedral cafe.

Before the race L said this was definitely her last Great North Run but... she seems to have really enjoyed this one. We also have one more year of our three year ‘membership’ and next year is the race’s 40th Anniversary. I rebook the hotel for next year.