Today I risk the bike. It was bloody windy but still good fun. L goes to PT which is far more of a torture session than riding in the wind. Unfortunately her personal trainer will soon be departing her gym but he does leave her with a training programme for three sessions a week.


In the evening I get to see a band for the first time just as they are splitting up. The Spook School were formed in 2010 but after nine years and three albums this is sadly their farewell tour.

I am told that they are pure entertainment live, so it makes you wonder what’s took me so long to get to see them. Tonight they live up to their entertainment billing by launching their set by launching themselves into space. Well, they come on stage wearing matching astronaut outfits and cardboard boxes on their heads for helmets to the strains of Babylon Zoo’s ‘Spaceman’. It is an curious entrance indeed but an entertaining one.

The four piece from Glasgow then launch into ‘Still Alive’ a massive anthem from their third album ‘Could It Be Different?’ which is the first of many great singalong moments tonight. It also signals the disrobing of drummer Niall McCamley from his spacesuit. Attire that clearly isn’t suitable for drummers.

‘Still Alive’ takes sharp aim at bigotry which is an issue The Spook School have close to their hearts. After trying to tell people through their music, but largely failing, their guitarist Nye Todd came out as transgender a few years ago and started to transition.

Since then the band who include Nye’s brother Adam, also a guitarist, have gained a lot of credit for tackling gender fluidity and standing up for a non-binary lifestyle. Yet musically, despite three highly impressive albums, they have never really broken through. 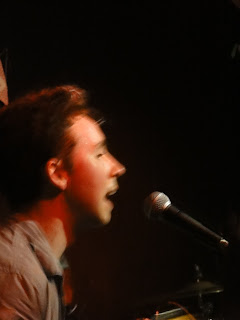 Even so the decision to call it a day was a surprise. With the Spook School being seen as an ‘issues’ band perhaps that has all weighed too heavily on them. Talented musicians that they are, it will be interesting to see what they all do now.

Right now though, they are going out with a bang. The band sound fantastic, ripping through a set that is a celebration of the past nine years and their three albums. Nye’s transition has certainly changed the level of his voice to what it was on the band’s early material and that is very noticeable tonight but it adds rather than subtracts from their performance.

They mix up their up-tempo singalong numbers with slower moments. The wistful plea of ‘Keep In Touch’, their final single, is immensely fittingly tonight. Bassist Anna Cory contributes haunting backing vocals to the song that gives it an extra level of sadness. While Cory also takes lead vocals on several tracks including the excellent ‘Less Than Perfect’. 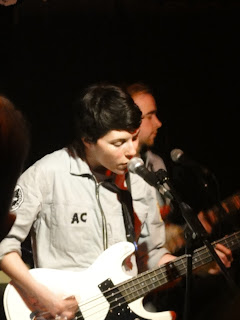 At other times they do not take themselves seriously at all, or rather McCamley doesn’t. The drummer delivers a jokey monologue between every song. This is clearly part of what they are but the rest of the band do seem to carry a look of ‘having heard it all before’ on their faces. He seems to be advertising himself post Spook School to any bands who might be looking for a drummer. If not, a career in stand-up comedy clearly beckons. 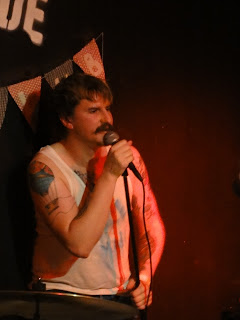 The band wind the set up with ‘Try to Be Hopeful’ before they put their cardboard helmets back on and leave the stage, destined for the moon.

They return for an encore, on the moon, and a lively cover of Fleetwood Mac’s ‘Go Your Own Way’. Then close the night with ‘I Want To Kiss You’ and with that the final Spook School gig in Nottingham is at end. They have one more show to do in home town Glasgow tomorrow. Then the Spooks are gone, possibly for ever.