On Sunday we head up to Sherwood Pines for their New Year 10k, which is organised by those nice people at Nice Work. It is a nice leg stretch on a route that contains a lot of the Sherwood Pines parkrun.

They mess up on the course though. It starts near the café and the opening straight leads you on to a circular course which you do once for the 5k or twice for the 10k before finishing with the same straight section to the finish.

Mathematicians among you will have immediately noticed that the total length of the 10k therefore cannot be twice the length of the 5k. It would require another out and back of the straight\finish section to be so, therefore one of the distances is going to be inaccurate. This clearly is the 10k which ends up being only 9.5k. Which makes my time of 47:22 look even worse.

As we’re both marathon training, we then grab the dogs and do another 5k-ish lap of the course, just for fun.

Jojo Rabbit is a comedy, yes a comedy, about a 10-year-old boy and his imaginary friend called Adolf Hitler... Not going to work is it? Well, maybe.

Firstly it’s a bit of a shock that this storyline even made it on to the big screen what with people’s sensitivities these days even though making fun of Nazi Germany and Adolf Hitler is nothing new. Hello Mel Brooks. That was back in the 60's when World War II was a lot fresher in the mind but the world was lot less snowflake then. 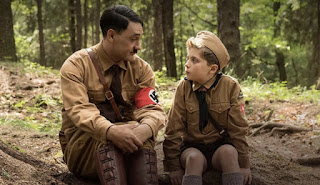 Taika Waititi wrote the film, financed it, directed it and plays Hitler himself. I hope he lands some sort of award at the Oscars. I mean what more does a guy have to do.

The film is set in the dying days of the Second World War and follows Johannes 'Jojo' Betzler (Roman Griffin Davis) who in his youthful naivety, and because he’s a big fan of swastikas, signs up for the Hitler Youth. His local camp is run by Captain Klenzendorf (Sam Rockwell), a one-eyed drunk who is clearly miffed at no longer being allowed out on the battlefield. 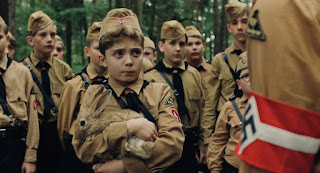 While Jojo clearly dreams of becoming a war hero it's not really in his makeup and he gains the nicknamed 'Jojo Rabbit' when he fails to prove himself by killing a rabbit in one of the films least endearing scenes. He then blows himself up with a hand grenade, at which point he is assigned the more sedate task of handing out leaflets.

All the time he is ‘advised’ by his imaginary friend, a rather camp caricature of Hitler, while his father is MIA on the Italian Front and his mother Rosie (Scarlett Johansson) is busy working for the resistance. 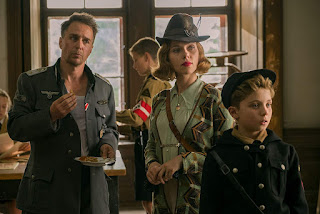 It turns out his mother is also hiding a Jewish girl, Elsa (Thomasin McKenzie), in the attic. She is a former classmate of Jojo's sister Inge who has died of flu. Jojo is horrified when he discovers her and threatens to hand her in to the Gestapo until she points out that his mother would be executed for hiding her. Instead the pair start to get on which infuriates Imaginary Adolf as Elsa gradually picks away at the years of brainwashing that Jojo has received. 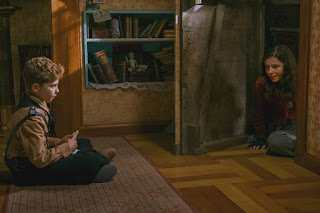 When Jojo writes a propaganda book on the Jews for Klenzendorf she feeds him crazy stories about the Jews having special powers. Meanwhile Jojo forges letters to her from her fiancé Nathan, telling her that Nathan wants to break up with her.

When the Gestapo discover her she pretends to be Inge and gets away with help, surprisingly, from Klenzendorf. Jojo is relieved but then later that day, finds his mother has been hanged in the street in a remarkably understated scene. Then as news breaks that the Allies are closing in, Jojo sees his school friends in the Hitler Youth being hurled into battle as a final desperate last act. 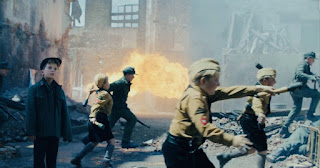 It’s certainly a different approach to Hilter and the war. Waititi’s film seems to deliberately sidestep addressing the evils that he shows you and instead lets it wash over you. Yet he still makes a point, I think, about how easily such evil thoughts and ideals can breed in a nation. Which is a very relevant point today with nationalism reappearing around the globe. Whether it’s the right approach, I’m not sure.

We find that Krubera is on again at Broadway and also that January is Vegetarian Month. I take a punt on their Vegan Thai Noodles which were nice but consisted mostly of beans with not much sign of the promised mushrooms, peppers and sweet potato but that’s often my complaint when I'm promised Chicken Thai Noodles as well.

After the film we go for drinks in Kean’s Head.
Posted by FitForNothing at Sunday, January 05, 2020