New Year's Day is of course Parkrun Double Day. There are terrifying rumours of a Clifton-Rushcliffe double which would give me two chances in one day to break my ankle but then it would probably be so packed that the Lad and I won't get chance to break into a run anyway.

How on earth would they fit more than 100 folk into little old Clifton? While Rushcliffe has already reached almost the size of the Great North Run with rumours abound that people are taking over twenty mins to get over the start line. They'll be having to hold a ballot for places before too long.

The whole project is kiboshed by flooding at Clifton which means they have only managed to run three parkruns since the end of September. Instead we do the much safer option of Alvaston followed by Markeaton.

Afterwards we go for lunch in the Nag’s Head in Mickleover, for a couple of naughty pies and chips before going to visit L’s folks.

Of course Christmas (if it is still Christmas) wouldn’t be Christmas without a dodgy film. I’m talking about ‘Last Christmas’ but it is true that there might be even dodgier possibilities. Broadway is closed today, so we are at our local Showcase instead.

We are introduced to Kate (Emilia Clarke), or Katarina to give her the name she dare not speak, who came to UK with her family as refugees from the former Yugoslavia when she was child. Her day job is as an elf in a Christmas store working for a woman called Santa (Michelle Yeoh). That’s not her real name... although Kate seems to think it is. 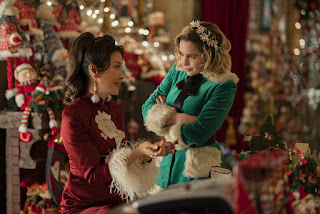 Kate is also an aspiring singer and a George Michael fan who is perennially homeless after falling out with almost everyone she shares accommodation with by either breaking all their possessions or killing their pets. Instead she becomes adept at sofa surfing which isn’t terribly compatible with her liking of one-night stands. 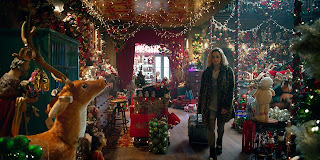 She could of course go home to her family but she finds them overbearing, particularly her mother Petra (Emma Thompson), even though they all rallied around her when she was very ill the year before. Thompson also co-wrote the script but isn’t terribly good at an East European accent. 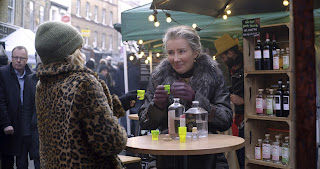 Things start looking up for Kate when she meets Tom (Henry Golding) a man who is always looking up at the beauty of the world, even if he won’t let her surf on his sofa let alone share his bed. Tom works as bike courier and volunteers at a homeless shelter where the other volunteers have never met him. To Kate’s dismay Tom proves maddeningly elusive and even keeps his phone at home in a cupboard but inspires her to sort out her life and be new nice to people even after inadvertently outing her sister Marta (Lydia Leonard) as a lesbian to her own family. 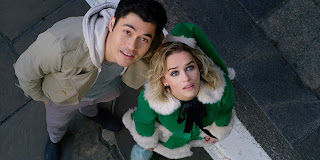 The film is inspired, as the title suggests, by a certain song penned by George Michael and also features many other songs by him. The entire premise lies behind interpreting the lyrics ‘Last Christmas I gave you my heart’ literally and it is how quickly you latch on to this which enables you to work out who Kate’s new friend actually is. Some may say that the film does this 'classic' track a disservice but I'd say it gets exactly what it deserves.

As I was expecting a straightforward RomCom-By-Numbers I was rather pleasantly surprised by the film. It is neither particularly romantic nor much of a comedy although it does have a few moments that make you smile. Mostly its humour tries to be politically correct but somehow ends up being completely the opposite. 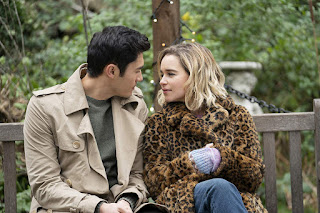 It isn't even all that Christmassy, save for a festive Covent Garden setting, and it is perhaps for all these reasons (and Clarke’s amazing eyebrows) that I rather liked it. Yes it’s sooo trashy but then Christmas itself is inherently trashy and false. Clarke herself is brilliant and will no doubt use this film as a steppingstone to bigger and better things.

There is a rather unnecessary subplot about post-Brexit xenophobia but it never really goes anywhere as if a lot of the scenes to do with that ended up on the cutting room floor. While its pro-immigration message is somewhat undermined by using two Londoners in Clarke and Thompson to play immigrants. Yet it is good to see an attempt to depict migrant families in a mainstream film.
Posted by FitForNothing at Wednesday, January 01, 2020