My Leeds United supporting friend has been told in no uncertain terms, by many people, that he needs to be more positive about his team, who are comfortably placed in 2nd in the Championship table. It’s probably his first ever New Year’s Resolution.

Leeds promptly lose 2-0 at home to Sheffield Wednesday and I turn my phone off before he gets chance to send his thoughts through. Derby meanwhile draw 2-2 at Middlesborough.

This all comes after doing parkrun in the morning at Forest Rec and then in the evening we're at Broadway. It is the 2nd week of veggie month, which I am more than happy to indulge in.

It is 1917 in the British trenches and the German army appear to be in withdrawal but aerial reconnaissance has revealed that they are in fact lying in wait for a British attack. Two British soldiers, Tom Blake (Dean-Charles Chapman) and William Schofield (George MacKay) are called upon by General Erinmore (Colin Firth) to carry a message by hand, because field telephone lines have been cut, to Colonel Mackenzie (Benedict Cumberbatch) of the Devonshire Regiment. The message will instruct Mackenzie to call off the scheduled attack because it would jeopardise the lives of 1,600 men. Blake has been chosen because his brother Joseph (Richard Madden) is one of these men. 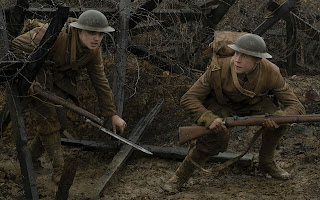 With time short, the men leave the trenches and cross No Man’s Land which is a sea of bodies, dismembered limbs and dead horses until they reach the abandoned German trenches, which they find are booby-trapped. A tripwire is triggered by a rat and the explosion nearly kills Schofield but Blake rescues him.

They then reach at an abandoned farmhouse from where they witness a German plane being shot down. They drag the injured pilot from the plane before it explores but the ungrateful pilot stabs Blake. Schofield shoots the pilot but can't save Blake and has to carry on alone.

After hitching a lift with another British convoy, Schofield then has to cross a bombed out canal bridge into the ruins of Écoust-Saint-Mein where he comes under fire from a German sniper. In the ensuing fight the sniper is killed and Schofield is knocked out cold. When he regains consciousness he heads off through the bombed-out French town under heavy fire.

It is rather unbelievable that he manages to dodge so many bullets before stumbling into a basement where he has time for a social call with a French woman (Claire Duburcq) and her child while I am literally screaming at him that he has a battalion to save.

Eventually continuing on, Schofield is again repeatedly shot out before escaping by jumping into a river where he amazingly avoids drowning despite being swept over a waterfall. Suddenly it's all gone a bit Indiana Jones.

The river spit him out on to a riverbank which by some amazing coincidence is where the Devonshire Regiment are having a singalong before heading to battle. Schofield manages to creep up on the Regiment without anyone noticing as they seem to have neglected to post any guards.

In one sense director Sam Mendes has made an epic film that looks great, is really dramatic and that puts the audience right in the middle of the action. It would also have been nail-biting stuff if you didn’t know for sure that Schofield would make it to Blake’s brother once Blake himself had met a grisly end. The only other problem really is that I just don't buy the plot at any price.


Afterwards we head to the Bunkers Hill for a couple of drinks before finishing off in Brewdog. L is appalled it’s gone 2am when we get to bed.