Our second weekend away is without the dogs and Daughter is dog sitting. We head to Brighton for the non-Marathon. I felt guilty to keep moving the hotel booking every time the Marathon is cancelled and felt we should go to support the hotel.

I head to Nottingham train station on the tram, which is fairly quiet, and meet L there. As we usually do when we head south through London, we have a stop off in the Big Smoke. Although it’s not so smoky at the moment and Friday night is really quiet. Our hotel, The Crestfield, only seems to have a few rooms taken and we have booked a table at the Parcel Yard but probably didn’t need to because that is quiet too. So it's a evening with several very peaceful pints of both Fullers ESB and HSB.

We have breakfast near King's Cross which I have to order on an App. Then we get the Thames Link to Brighton although the electronic signs on the train keep insisting that we’re in Kings Lynn, they are incorrect.

Mask wearing is widespread in Brighton, however the centre of town is uncomfortably busy when we arrive but not too bad when we get down to the sea front where our hotel, which is called Nineteen, is. We have a person free check in and a nice posh room. The dogs would have approved. 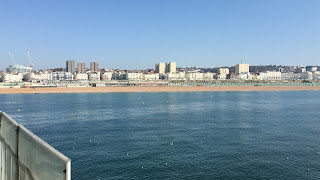 On Saturday we walk up to Hove, taking in parts of the Marathon route. A lot of people seem to be running the Marathon virtually but on the same course on the same weekend. It’s oddly inspiring. For me anyway, L seems unmoved.

We have a couple of pints in a pub called The Southern Belle in Hove, but not so many that we start seeing upside down houses. 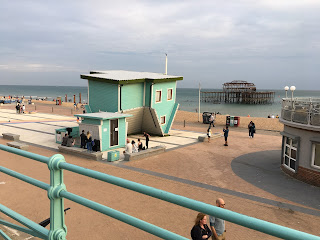 Then we head back to what would have been my pre-race meal as we honour our booking in The Coal Shed which is a expensive steak joint but also very good.

After a trendy breakfast at Red Roasters on Sunday we walk in the opposite direction up to Saltdean. There is method to L’s madness here as we are heading to Saltdean Lido. L was desperate to swim at the Lido but we have missed the last session of the year by a week unless you’re a dog that is because it’s their annual dogs only weekend. Sadly we are without the dogs but they wouldn’t have been allowed in while we were there because it’s been booked out by the local Labrador club. 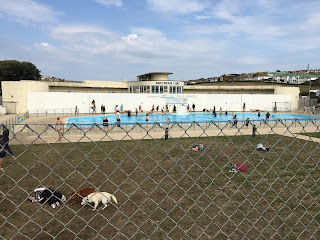 A very nice mid-afternoon pint outside the Hand Brew Pub (no inside allowed) before an evening of a few pints in the Mucky Duck and a post non-race curry at the Pavel Indian Restaurant.

Then on Monday there’s time for breakfast at Wolfox Avenue before an amble on the pier and then the train home. There are a few renegade youngsters on the train who break the social distancing that everyone else is adhering too but that is nothing to how uncomfortably busy the Nottingham Tram is. I won’t be using that again for a while.

Posted by FitForNothing at Monday, September 21, 2020