On Thursday I embark on another terrifying trip to Asda but apparently supermarkets are not virus hot spots while sparsely populated pubs are. Meanwhile Erewash and Chesterfield join us in Tier 2 but not (yet) Derby.

On Friday I finally watch my first football match of the new season as Derby play Watford and lose. Everyone else heads upstairs to join an online workout with Daughter although it sounds like the dogs are fighting rather than pumping weights.

On Saturday L’s Mum ends up in hospital for most of the day and L goes over to sit with her Dad, thereby topping up her Jason Bourne fangirl status and where she also gets to use the microwave. Which is a novelty for us as we got rid of ours about 15 years ago.

The boys and I amuse ourselves cutting the lawn, catching up with the Giro d'Italia and with the bits of Troubled Blood that our audiobook decided to skip over.

I also take receipt of a parcel for L although she assured me that if I was out it didn't matter because it was only a couple of swimsuits and they'll fit through the door, assuming Hermes find the right door.

It's a rather large parcel that arrives, quite a big box and it rattles. Clearly not just a couple of swimsuits. L claims it couldn’t possibly for her... but it has her name on it. When she gets home and opens it, it’s two swimsuits and a huge Sports Direct mug in a box. Clearly a freebie, not something she ordered and now something that has to be (somehow) environmentally disposed of.

I run 10k with the Lad on Sunday. Our first run for a while and hopefully the rest will have done my dodgy knee good. Meanwhile the Thoresby 10 miler goes ahead and I sort of regret not entering but they did want a commitment a month ago which I wasn’t prepared to give.

We don’t go out on Saturday but we head down to the Borlase for a pint on Sunday visiting the Banksy mural on the way. There’s a bit of a queue on our way out but it’s quiet enough to get a photo on the way home. 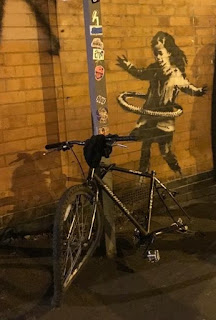 Posted by FitForNothing at Sunday, October 18, 2020