We arrive home to find that Nottingham now has the highest rate of Covid-19 infections in the country. Although this appears to be entirely down to the approach taken by Nottingham University, which appears to thoroughly sensible to me. The University is using its own labs and its own money to test all 10,000 of its students every week and to get them to isolate if they’re positive.

Meanwhile our Great Leader announces that the country is to be divided into three tiers of restrictions: medium, high, and very high. Which is like when buying wine in a pub e.g. nobody wants to sell you a small. The high tier is basically the no households mixing rule as in Northumbria the other week. On Wednesday, Nottingham joins them.

The day before that happens I meet up with my friend in Derby for a last night of freedom. We have a drink in the Alexandra, then more drinks and food in the Brunswick. My friend has soup as he's been at the dentist but then follows this with a bag of crisps.

L starts at David Lloyds having cancelled her council membership and her online Pilates. She says her first swim there was beautiful and she swam outdoors. Which was something she declined to do in Northumbria and Cumbria.

L has a delivery of face shields at work, having inadvertently ordered 10 packs of 10 rather than just 10. She’ll be accused of hoarding, so I’ll have a pack for dog class.

The new NHS Covid-19 App is a bit rubbish really and keeps sending out random exposure notifications that no one understands. So now they’ve started sending out a second notification telling you to ignore the first one... 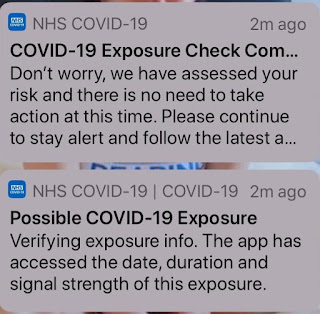 Wednesday is the first day of the new High (Tier 2) restrictions in Nottingham. L was supposed to meet Daughter for a meal but now she can’t. So they cancel their restaurant booking and meet outdoors at Forest Rec instead with a takeaway from the Lobster Pot. Quite eclectic really.

Having read through the new rules, which are naturally confusing, I believe I can dog train. I think. L is more worried about us bringing home fleas  than Covid, so I impress on the Lad that there is to be no household mixing.

Posted by FitForNothing at Wednesday, October 14, 2020