We head north to Belford in Northumbria for the first week of our two week holiday. There has been a local lockdown of sorts placed on Northumbria although the only difference to us seems to be pubs shutting at 10pm but we’re always drunk long before 10pm anyway. The no household mixing rule won’t be an issue as we don’t know anyone up there to mix with. As usual we’re just planning long lonely walks and runs in the rain.

For, I think, the first time ever on a Summer trip we are not camping. I’m disappointed, I can tell the dogs are disappointed but oddly L seems ecstatic. I’m sure she doesn’t mean it.

We have a cottage which when we arrive doesn’t seem to have any electricity. So the first task is to call the landlord to get that sorted which he does. He tells us he owns one of the local pubs but when we visit we get harangued by one of the locals for being on holiday. Although he a bit stunned when he learns that the landlord is aiding and abetting us in this felony by putting us up in his cottage. Oddly as he stands berating us he is closer to us than anyone gets all week.

The cottage also doesn’t have Wi-Fi which causes us both to run up high data bills on our phones but other than that the cottage is great and very dog friendly.

We do a fair few coastal walks via the likes of Bamburgh, Seahouses and Berwick on Tweed with lots of dips in the sea for the boys. L’s walking boots don’t seem too impressed though and expire early on. We don't get out for any runs. The cottage isn't in a great location for that as it is by a busy road. 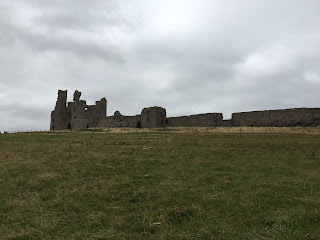 A particularly nice walk is from Craster to Low Newton-By-The-Sea via Dunstanburgh Castle. At Low Newton-By-The-Sea the Ship Inn brews its own beer and we finish up in the Jolly Fisherman at Craster. By now we’re realising that with all the restrictions on capacity booking somewhere to eat is going to need a military plan or the internet. We book online for two meals at the Percy Arms at Chatton and one meal at the Apple Inn at Lucker. The rest of the time we eat in.

We finally achieve a trip to Lindisfarne, twenty odd years after our first attempt when the tide defeated us but not Son who tried to swim there until someone stopped him. This time we go early, allow ourselves to get marooned there and then leave later when the tide goes out again taking a bottle of Lindisfarne Mead with us as a souvenir. 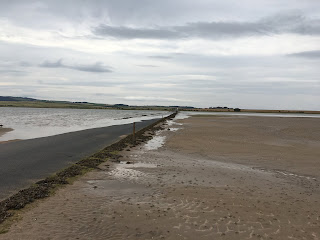 We have a long drive out to Kielder Water and back but then can’t walk Kielder when we arrive because the parking metres only take cash and we don’t have any.

We also manage to get slightly lost on an amble in the Cheviots Hills from Wooler, where they are now setting up a distillery called Ad Gefrin (Yeavering) which was apparently the medieval capital of the Kingdom of Northumbria and means ‘near the hill of the goats’. We correct our route by descending across country down a hill (no sign of any goats) where L manages to fall and pull a muscle in her foot. She spends the rest of the holiday with a limp.

The weather is largely warm and dry through the week until we depart for Cumbria on the Saturday. Our trip charting the path of Hadrian’s Wall is done in a downpour.

Posted by FitForNothing at Friday, October 02, 2020