We both off work on Monday, in lieu of the not happening Langdale 10k. L bravely heads into Nottingham to do some Christmas shopping. She goes late and says the city is quiet.

I finally get my Covid Antibody test result from late October. It’s negative although I’ve since had plenty of time to develop new antibodies.

The Lad is not popular after munching his way through half an onion. I’ve no idea how he got hold of that but you don’t currently want him breathing on you.

On Tuesday, after even more than the usual amount of dithering, the Government finally instructs London to join us in Tier 3. Gradually throughout the week even more of the country joins us in the highest Tier but bizarrely Herefordshire are moved down from Tier 2 to Tier 1.

I go to dog training which is our last of the year but with everyone expecting the Government’s ‘Five Days of Christmas’ to deliver us into another lockdown we expect it might be our last for some time.

Wednesday sees L grabbing a swim while she still can. Bizarrely she protests it didn't rain on her in the outside pool. Her day improves though as she rescues an errant spaniel wearing a bow-tie on the way home. These things are obviously big highlights in these Tier 3 times.

On Thursday, we head to the Christmas At Wollaton Light Show. After the furore caused by Nottingham’s Christmas Market we fully expected the council to pull out all the stops on this one. So we anticipated a hugely social distanced event with them perhaps letting in only about twenty or thirty people at a time. How wrong we were.

We walked around to the main entrance of Wollaton Park to find that every car park was full and people were even parked all over the grass field with a steady stream of people walking up to the hall. It was the sort of thing you’d expect when you’re heading to a football match but of course crowds at those have been banned since March. 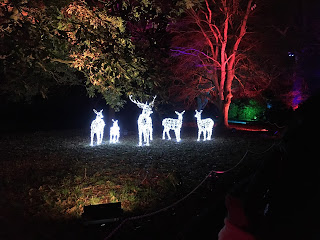 We put our masks on, meet Daughter and her plus one, and then join the long queue for entry where the signs stated that you should observe two metre distancing at all times but that was totally impossible. About half a metre was the best you could do. 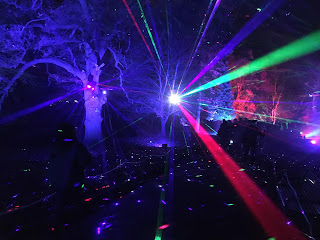 We then queued all the way around the light show as staff rushed around clearly agitated about how busy it was but clearly powerless to do anything about it because the organisers had sold way too many tickets. As it turned out it was a very impressive light show but it was far from safe. 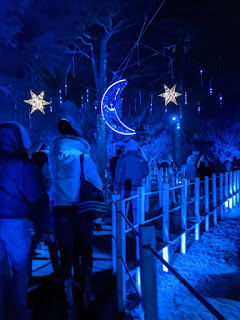 Posted by FitForNothing at Thursday, December 17, 2020